The Government of Swaziland (recently renamed Eswatini) has frozen all job hiring, promotions and creation of new posts because it is broke.

The decision had been long expected but was finally confirmed at the beginning of August.
Evart Madlopha, Principal Secretary in the Ministry of Public Service, announced this to principal secretaries and heads of departments through Establishment Circular No. 3 of 2018.

It read in part, ‘This state of affairs has been necessitated by the current financial situation in the country and the cash flow problems faced by government.’

Meanwhile, the Swazi Government confirmed it would go ahead with building the outgoing Prime Minister Barnabas Dlamini a retirement home worth at least E3 million.

According to a report in the Observer on Saturday newspaper in Swaziland (11 August 2018) the government plans E560 million (US$40 million) in cuts, including more than E49 million to upgrade schools and colleges in the kingdom. E50 million will be cut from the health budget.

As of 30 June 2018 Swaziland owed a total of E12.9 billion, the equivalent of 20.8 percent of the kingdom’s GDP. Of that nearly E3 billion was owed to suppliers of goods and services.

All areas of public services have been hit by the financial crisis as companies refuse to supply the government until outstanding bills are dealt with, announced it had run out of stocks of medicines because the government has not paid its bills.

In July Swazipharm, Swaziland’s largest distributor of pharmaceutical products and medical equipment to the healthcare system of Swaziland, including government hospitals, private hospitals, local government, clinics, humanitarian organisations, private organisations, missionaries, pharmacies and chemists, reported it was running out of stocks because bills had not been paid.

Long before Swazipharm’s announcement medicines, including  vaccines against polio and tuberculosis had run out in many government hospitals and clinics because drug suppliers had not been paid. In June 2017, Senator Prince Kekela told parliament  that at least five people had died as a result of the drug shortages. About US$18 million was reportedly owed to drug companies in May 2017.

In June 2018 it was reported that children collapsed with hunger in their school because the government had not paid for food for them. The kingdom had previously been warned to expect children to starve because the government had not paid its suppliers for the food that is distributed free of charge at schools. The shortage was reported to be widespread across the kingdom.

Meanwhile, King Mswati III who rules Swaziland as one of the world’s last absolute monarchs wore a watch worth US$1.6 million and a suit beaded with gold weighing 6 kg, at his 50th birthday party in April. Days earlier he took delivery of his second private jet, a A340 Airbus, that after VIP upgrades reportedly cost US$30 million. He received E15 million in cheques, a gold dining room suite and a gold lounge suite among his birthday gifts. He now has two private planes, 13 palaces and fleets of top-of-the-range BMW and Mercedes cars.

Seven in ten of Swaziland’s 1.1 million population live in abject poverty with incomes less than the equivalent of US$2 per day.

Despite the funding crisis, the Swazi Government has also earmarked E1.5bn to build a conference centre and five-star hotel to host the African Union summit in 2020 that will last only eight days. There are also plans for a new parliament building that will cost E2.3 billion.

Meanwhile, the World Food Program has said it cannot raise the US$1.1 million it needs to feed starving children in the kingdom in the coming six months. 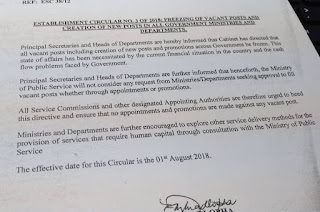 Swaziland Admits it is Broke
https://swazimedia.blogspot.com/2018/06/swaziland-admits-it-is-broke.html
at 9:42 AM