Prodemocracy leaders in Swaziland (eSwatini) who had their homes raided by police are calling on the absolute monarch King Mswati III to allow people to talk openly about the political future of the kingdom.

Political parties are banned from taking part in elections and groups that advocate for democracy are outlawed by the Suppression of Terrorism Act.

Six political groups have formed the Political Parties Assembly (PPA) to advocate for change. Leaders of these groups had their homes raided by police on Friday (20 December 2019). They were interrogated by police and had laptops, phones, tablets and other gadgets taken.

At a media conference on Saturday the PPA called on King Mswati to allow talks. The Times Sunday, a newspaper in Swaziland, reported Mlungisi Makhanya, President of the outlawed People’s United Democratic Movement (PUDEMO), said, ‘The King should convene a session where the people will dialogue. He has to mandate a team to engage with us. We don’t mean we should engage with him personally because that would lower his status as King but he can delegate a team mandated to discuss the governing of the country alongside the reigning monarch.’

The Times reported the PPA said if the King did want to be personally involved in talks they would need to adopt international standards, appoint a facilitator, have clear ground rules and a neutral venue.

There is open hostility in Swaziland between the supporters of the PPA and state forces, especially the police.

Jan Sithole, President of the Swaziland Democratic Party (SWADEPA), told the media conference the police service had been politicised and were taking actions on behalf of the government.

Separately, Ngomyayona Gamedze, the former Deputy President in the Swaziland Senate and now acting Chairman of Sive Siyinqaba, one of the groups in the PPA, warned government and the police against the continuous detention of political activists who were calling for democratic reforms.

He told the Swaziland News, an online newspaper, ‘Harassing political activists, breaking into their houses and seizing their cellphones amounts to the violation of human rights. A cellphone is a personal gadget with personal information that should not be accessed even by the police without the consent of the owner and what they doing now is wrong. I am not talking about hearsay here because I was there as a Presiding Officer when Parliament ratified these UN Conventions that ensured the protection of human rights. It’s now surprising that even the Human Rights Commission is silent on this.’

He added, ‘Is it a crime to openly express my political view that I don’t want the current government? Are these political activists expected to embrace the current government by force? Why are we allowing the police to violate human rights in this manner? Any detention of a person even if its five minutes amounts to human rights violation because you have taken that person out of his or her comfort zone, it’s worse when you have seized his cellphone because by so doing you have disconnected that individual from communicating with the world and gained access to personal information.’

Further police action is expected. The Times reported Sithole telling the media conference, ‘We are committed to the spirit of no retreat, no surrender, forward forever.’

Swaziland ex-Govt minister in hiding after calling on absolute monarch to hand over power
https://swazimedia.blogspot.com/2019/11/swaziland-ex-govt-minister-in-hiding.html
at 11:56 AM No comments: 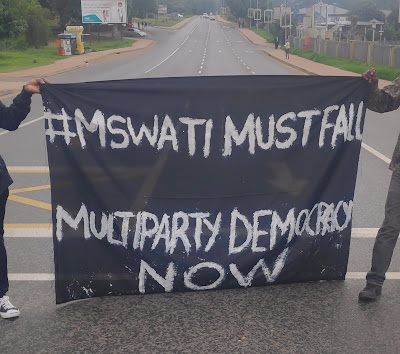 A newspaper in Swaziland (eSwatini) in effect owned by the absolute monarch King Mswati III has confirmed that police raids on homes across the kingdom were to seek out political activists.

The Observer on Saturday, part of the eSwatini Observer group, reported, ‘Police have intelligence on state security that has required the conducting of raids at homesteads belonging to political activists and the bringing in for interviews at their stations of these activists who are leaders of different political groupings.’

It reported a press conference given by Royal Eswatini Police Service National Commissioner William Dlamini after the raids on Friday (20 December 2019).

Leaders of at least five pro-democracy groups were taken to police stations and interrogated. All were released but phones, laptops, tablets and other devices were kept.

Political activity in Swaziland is severely curtailed. Parties are banned from taking part in elections and groups advocating democracy are outlawed under the Suppression of Terrorism Act. The King rules as an absolute monarch in a political system known as Tinkhundla.

The Observer reported Dlamini said they were seeking ‘information’ from those questioned. It quoted him saying, ‘We’re taking action on information that is not criminal per se.’

He said police raids on homesteads were routine in Swaziland. The Observer reported, ‘He said had it been through their choice, they would conduct the raids on a daily basis because that is what assists decrease crime throughout the country.’

He denied that only political activists were raided but there have been no reports of any people not connected with the prodemocracy movement being taken in for questioning.

The raids were reported by media across the world. Reuters reported, ‘Police Commissioner William Dlamini told reporters the police had “invited some individuals to assist us in our enquiries pertaining to state security information”’.

The Swaziland United Democratic Front, one of the groups targeted, in a statement circulated on social media said, ‘This comes weeks after the all progressive formations in the country resolved to unite under the banner of the Political Party Assembly to fight against the Tinkhundla regime. This led to the start of a campaign that was dubbed #MSWATI MUST FALL and has since been gaining momentum and meeting equal resistance from the autocratic regime.’

The Southern Africa Litigation Centre in a statement said, ‘We are concerned by the actions of the police, which appear to be targeted at those activists who have been prominently involved in protests relating to workers’ rights and who have been promoting multi-party democracy and government accountability in the country.’

It added, ‘We call on the government to respect its citizens’ rights to freedom of expression, association and assembly and to end the harassment of the leadership of political parties and trade unions. We further call on the government to release all persons who are currently in custody because of their criticism of the monarchy, including Goodwill Sibiya, who has been detained since May 2019.’

Swaziland ex-Govt minister in hiding after calling on absolute monarch to hand over power
https://swazimedia.blogspot.com/2019/11/swaziland-ex-govt-minister-in-hiding.html
at 12:26 PM No comments: