Musa Ngubeni, the democracy activist in Swaziland / eSwatini, has been jailed for seven years with four of them suspended for possession of explosives.

His case took eight years to conclude and the conviction has been criticised for lack of evidence.

Ngubeni was an activist with the banned Swaziland Youth Congress (SWAYOCO) and the People’s United Democratic Movement (PUDEMO). In Swaziland political parties cannot contest elections and groups campaigning for democracy are banned under the Suppression of Terrorism Act.

Ngubeni was found guilty and sentenced by Piggs Peak Magistrate Joe Gumedze. Swaziland which is ruled by King Mswati III as sub-Saharan Africa’s last absolute monarch does not have jury trials.

Ngubeni was arrested together with student leader Maxwell Dlamini in 2011 and charged with contravening the Explosives Act. They were both arrested during protests against the government which is not elected but handpicked by King Mswati.

According to Ngubeni and Dlamini they were subjected to torture during their interrogation. They were both released on bail in 2012 under strict conditions, including having to report to the police four times a week. Their trial resumed in 2014, where Dlamini was acquitted.
Peter Kenworthy of Kenworthy News Media who has followed the case since 2011 reported Ngubeni and Dlamini both insisted that the charges against them were fabricated and political, and that the state had stalled their case for three years due to lack of evidence.

A mysterious brown shoe box, that was allegedly found near Ngubeni’s home in Mbikwakhe when he was arrested in 2011 and was supposed to have contained explosives, detonators and wires, was never produced in court.

Initially a witness for the prosecution had claimed that the box was too dangerous to bring to court. Later the box was claimed to have exploded after a South African bomb expert had tried to assemble it.

Kenworthy reported the trial has been described as a farce by Swaziland’s democratic movement. Amongst other things because testimonies of the prosecution witnesses were untruthful and contradicted each other, because the pair were interrogated by what appeared to be hired South African Police investigators without the presence of Ngubeni’s and Dlamini’s lawyers, and because Ngubeni and Dlamini appeared in court on occasion without legal representation.

Following Ngubeni’s conviction, SWAYOCO said in a statement the Mswati government tried to deliberately delay and prolong the case to procure ample time to manufacture false evidence for his conviction.

The Communist Party of Swaziland said in a statement, ‘If there is any individual who still doubts that Swaziland’s judiciary remains one of Mswati’s tools through which he suppresses the people of Swaziland, then Ngubeni’s case should be the ultimate illustration point.’

Grants for people with disabilities in Swaziland / eSwatini are to be cut because the government has run out of money.

Now, only 20 people in each political constituency (known locally as tinkhundla) will get benefits.

There are 59 tinkhundla in the kingdom for about 1.2 million people. In 2016 the then Prime Minister Barnabas Dlamini estimated 114,000 people were living with disabilities in Swaziland.

President of the Federation of People with Disabilities in Swaziland (FODSWA) Sipho Dlamini said he had been told by Swaziland’s Deputy Prime Minister Themba Masuku the cutback was because of the ongoing financial crisis.

He told the Times of Swaziland (28 May 2019) his organisation would work closely with local leaders to choose who gets the grants.

‘People with disabilities have the same rights as able-bodied people and they are entitled to enjoy all citizenry rights.’

Since that report the Disability Act of 2018 introduced financial grants, but the kingdom, ruled by King Mswati III as an absolute monarch, is in economic meltdown. Public health centres and hospitals have run out of medicines, schools are without supplies and children are going hungry because feeding programmes have stopped. All because the government, which is handpicked by the King, cannot pay suppliers.

More deaths in Swaziland as government fails to pay medicine suppliers
https://swazimedia.blogspot.com/2019/05/more-deaths-in-swaziland-as-government.html
at 9:25 AM No comments:

Email ThisBlogThis!Share to TwitterShare to FacebookShare to Pinterest
Labels: disability, Dlamini Sipho, Federation of People with Disabilities in Swaziland, FODSWA 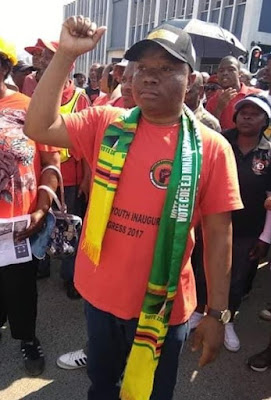