The ‘readers’ representative’ of the Times Sunday in Swaziland has said it was acceptable for the newspaper to publish an article that said battered women were ‘bitches’ and ‘most’ women who were beaten up by men brought it upon themselves.

The Ombudsman (who despite the title is a woman) is paid by the newspaper’s parent company, the Times of Swaziland, to adjudicate on complaints readers make about its own standards of journalism.

In the article complained of, Qalakaliboli Dlamini wrote that women abused men more than the other way round and said ‘most’ women who are beaten up by men brought it upon themselves.

He wrote, ‘Let us be honest with each other, women are the biggest abusers in the world.’ He went on to call women who were battered and then left their abusive husbands, ‘bitches’.

The Ombudsman wrote in an article published in the print edition of the Times Sunday (16 December 2012), but not published on the paper’s website, that the article complained of did not amount to hate speech against women.

She said it did not incite ‘violence or prejudicial action’ against women. She went on to say that Dlamini’s article ‘was supported by an argument (right or wrong)’. She added, ‘I refuse to dissect this gentleman’s [Dlamini] opinion. I refuse to interpret it.’

She said, ‘As a publication we are justified in strongly advocating our own views on controversial topics provided that the readers are treated fairly by making fact and opinion clearly distinguishable, not misrepresenting or suppressing relevant facts and not distorting such facts.’

The publication of the original article caused widespread offence to readers. The Ombudsman reported she had ‘received an overwhelming amount of complaints’ about the article.

Readers, whom the Ombudsman called ‘activists,’ have started a boycott of the paper and are encouraging advertisers to withdraw support. 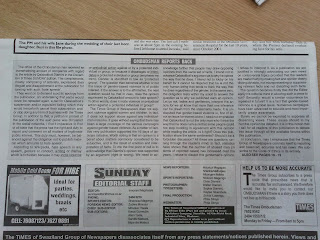