Schoolteacher Maxwell Myeni who tackled a gun-wielding police commander and wrestled him to the ground during a peaceful demonstration in Swaziland in which police shot and wounded a demonstrator has been arrested.

A photograph of Myeni tackling Station Commander Raphael ‘Sikheshekheshe’ Maseko of the Manzini police station appeared in the Observer on Saturday newspaper and on the Internet following the incident on Friday (24 August 2018).

Maseko had pointed his gun at Myeni moments earlier.

Willie Dlamini, a teacher from Salesian High School, was wounded in the arm when police opened fire with live ammunition during a protest about salaries.

The Communist Party of Swaziland (CPS) in a statement published on social media hours after the arrest said Myeni was taken at about 5.00 pm on Sunday (26 August 2018) at his home in Lavumisa by the arm of the police force known as Lukhozi.

It said, ‘Six heavily armed members of this royal Lukhozi arm bulldozed their way with two white vans into his house at Lavumisa.’

It added the Lukhozi police was ‘known for its torture of prisoners who often end up dead. Their greater focus is often on human rights activists, unionists, youth and student activists and members of political parties.’

It added Myeni was taken to Sigodvweni Police Station in Matsapha, a ‘notorious torture centre’.

No charges have been announced. 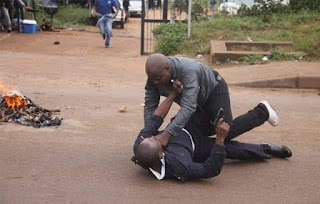