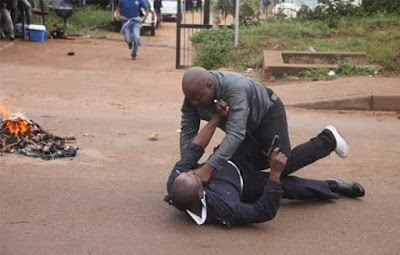 Musa Maxwell Zondinkhundla Myeni, the schoolteacher in Swaziland who came to international attention after he wrestled a gun-wielding police chief to the ground to stop him firing at teachers during a protest over salaries, appeared in court on six charges.

One teacher was shot and wounded by police on Friday (24 August 2018) as members of the Swaziland National Association of Teachers (SNAT) tried to enter their union building in Manzini.

The Magistrates’ Court in Manzini, the main commercial city in Swaziland (recently renamed Eswatini by the Kingdom’s absolute monarch King Mswati III), was packed with supporters on Tuesday (28 August 2018). In what might be a first they uploaded pictures and videos of their protest to the Internet from inside the court room.

Myeni, aged 35, a teacher at Matsanjeni Primary School, faced six charges including public violence, common assault and blocking the road. He was remanded on bail of E7,000 (US$485) to reappear in Manzini Magistrates’ Court on 12 September 2018.

Photographs of Myeni disarming Station Commander Raphael ‘Sikheshekheshe’ Maseko of Manzini police appeared in newspapers in Swaziland and on Internet and social media sites across the world. The Observer on Saturday and the Swazi News in Swaziland also published photographs of police officers pointing guns at teachers.

Willie ‘Mawillies’ Dlamini, a teacher at Salesian High School was shot and wounded in the arm after police fired into the crowd.

Njabulo Dlamini, a branch leader of SNAT, told the Peoples Dispatch, an online news site, ‘In most instances, the police first fire teargas to disperse protesters. But this time things were different. The police did not even give a warning. They started firing the live bullet at teachers.’

The Observer on Saturday newspaper in Swaziland reported the next day, ‘Several gunshots were heard and bullets aimed directly at the teachers flew in all directions while stones directed at the police officers also flew the opposite direction.’

It said teachers ran for safety and some pelted the police officers with stones.

The Observer, a newspaper in effect owned by King Mswati, reported that the Operational Support Services Unit (OSSU), which it called ‘the police’s semi-military wing’, arrived to back up the police.

Following the shooting the People’s United Democratic Party (PUDEMO) the best known of the banned political parties, released a statement. ‘PUDEMO calls upon the immediate arrest of all the police officers who were involved in the discharging of live ammunitions against the teachers of Swaziland. We particularly call upon the immediate arrest and prosecution of one Mr. Sikheshekheshe Maseko, who is said to be Manzini Station Commander, who was at the forefront of this murderous attack on the unarmed members of SNAT.’

The Communist Party of Swaziland (CPS) called the arrest of Myeni, who is also a local official of SNAT, a political move. Myeni had been arrested at his home on Sunday by six heavily armed members of the Royal Lukhozi arm of the police. It said Lukhozi was ‘known for its torture of prisoners who often end up dead. Their greater focus is often on human rights activists, unionists, youth and student activists and members of political parties.’ 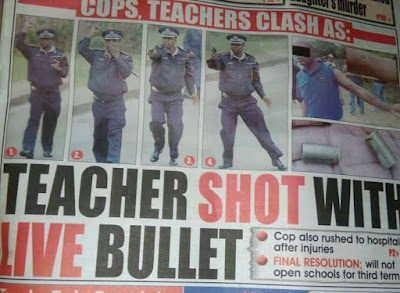 Swazi News front page the day after the incident 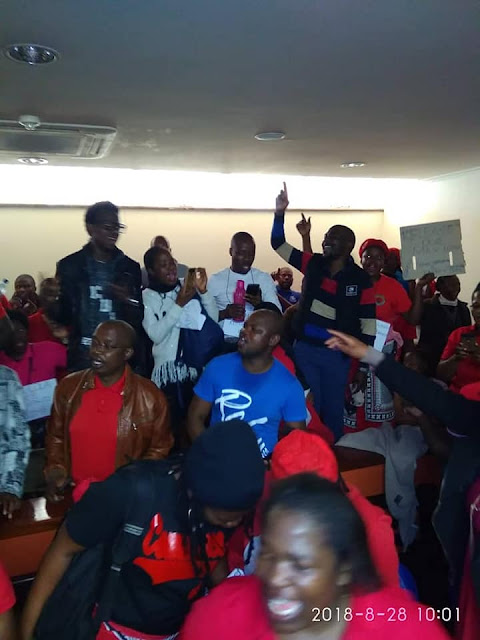 Protestors inside the magistrates’ court