Police in Swaziland shot and wounded a schoolteacher when they opened fire with live ammunition during a protest about salaries.

It happened on Friday (24 August 2018) in Manzini, the kingdom’s main commercial city.

The teacher was named on social media as Willie Dlamini, a teacher from Salesian High School.

The Observer on Saturday newspaper in Swaziland reported, ‘Several gunshots were heard and bullets aimed directly at the teachers flew in all directions while stones directed at the police officers also flew the opposite direction.’

The Observer reported, ‘Several gunshots were heard and bullets aimed directly at the teachers flew in all directions while stones directed at the police officers also flew the opposite direction.’

The Observer reported on Dlamini, ‘It was clear that a bullet had pierced through his arm and first aid was administered to him before an ambulance was called to rush him to the nearest hospital.’

Teachers were protesting against the Swazi Government’s decision not to pay them a cost of living adjustment on their salaries.

The shooting has raised tensions in Swaziland (recently renamed Eswatini by the kingdom’s absolute monarch King Mswati III). It happened the day before the first round of the national election was due to take place. Political parties are banned from taking part and the King appoints the Prime Minister and Government.

The Communist Party of Swaziland which previously called for a boycott of the election in a statement on social media said, ‘The country is degenerating to unprecedented state of lawlessness. Political activists in peaceful protests and those involve in daily mobilisation for Democratic change are a target.’

In a separate statement it also said, ‘It has now been brought to the attention of the Communist Party of Swaziland that Mswati has issued an order that the police must shoot anyone they suspect of trying to sabotage his sham elections.’ 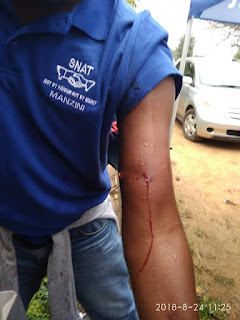 Schoolteacher Willie Dlamini who was shot and wounded by police in Swaziland. Picture: Communist Party of Swaziland Facebook