PRINCESS ON TV: BLUSHES ALL ROUND

Australia’s Channel Nine Network Television embarrassed itself on Saturday (5 May 2012) when it interviewed Princess Sikhanyiso of Swaziland.

It took four people to interview the Princess, another woman they described as THE Queen of Swaziland and the princess’ dopey brother, Prince Lindani.

And they blundered their way along a five minute interview.

Princess Sikhanyiso is KingMswati’s eldest child and ‘the queen of Swaziland’ was her mother Inkhosikati LaMbikiza. She is King Mswati’s first wife, but he has 13 in total. At least one of them is younger than his eldest daughter.

The interview was to mark the graduation from Sydney University of Princess Sikhanyiso. She has just received a Masters in Digital Communication.

The interview was on the Nine Network’s Weekend TODAY breakfast show. Prince Lindani sat silent for the most part, hiding behind his sunglasses. He only woke up when one interviewer asked him to show his enormous bling wristwatch to the camera.

Princess Sikhanyiso was described as ‘well loved’ by the Swazi people. Even she was embarrassed by this – and anyone who has followed her so-called career in rap music will know she is usually incapable of embarrassment. ‘I’m well-loved in Australia too,’ she whimpered.

The interviewers had no clue that King Mswati III, sub-Saharan Africa’s last absolute monarch, and his Royal family live life high on the hog, while seven in ten of his subjects live in absolute poverty, earning less than two US dollars a day. Nor, did they realise they were perpetuating a myth about the Swazi Royal Family that they are loved by the Swazi people.

Only last week a Gallup opinion poll revealed that 43 percent of the people interviewed disapprove of the way the King runs the kingdom.

The interview ended with Princess Sikhanyiso performing a rap song.

If you have a high embarrassment threshold, you can watch the full interview by clicking here.

(Pictured. The Princess, her mother and the Prince on Australian TV. Picture: Screen grab) 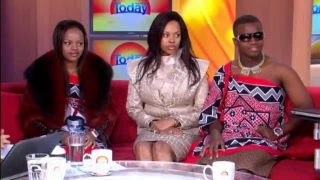