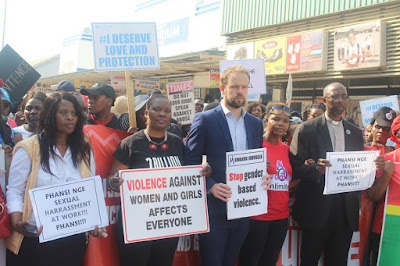 Campaigners in Swaziland / eSwatini want the increase in murders of women and children to be declared a national emergency.

The number of victims is increasing and ‘has reached alarming proportions’, they say.

People from across all sectors of civil society marched through Manzini, the main commercial city of Swaziland / eSwatini, to draw attention to killing of women and children in the kingdom.

In a statement WLSA said, ‘This march was triggered by the fact that over the past few months, we have been reading reports of women and children being murdered by their husbands/partners and fathers, respectively.  With the Sexual Offences and Domestic Violence (SODV) Act having been passed into law, the question on many people’s minds is why the violence and killings are continuing despite the harsh sentences that the Act prescribes.

‘It would appear that the violence is increasing rather than decreasing and this trend is worrying to say the least. Many are placing the blame of the “increase” on the enactment of the SODV Act, though they are unable to explain why they arrive at this supposition.’

It added, ‘The prevalence of violence has reached alarming proportions and the country needs to declare it an emergency. Perhaps there is a need to address it in the same manner as the HIV pandemic was addressed, and design programmes specifically for this. Resources should be availed to drive the programmes for their effectiveness.’

WLSA added, ‘There is a very alarming component to the latest murders that people seem not to notice. These killings are not carried out in impulse or in the heat of the moment; what could be called crimes of passion. The latest killings have been premeditated by the perpetrator; this is evident from the choice of weapon that the perpetrator uses. The use of guns, poison and even drowning shows that there was some planning that took place before the crime was committed. So we then come back to the question of why the perpetrator opted for murder than another solution.

‘This question is particularly relevant when taking into account that some of these murders are committed in the presence of other people, with no attempt to hide the evidence or to evade prosecution.’

The call for action echoes one made by the United Nations Population Fund (UNFPA) in September 2018. It said it would support the kingdom’s government and make gender-based violence (GBV) a national crisis. UNFPA’s Officer In Charge Margaret Thwala-Tembe told a workshop that marginalised and vulnerable groups such as persons living with disabilities and LGBTI should be included.

In December 2018 Deputy Prime Minister Themba Masuku said, ‘Government recognises the need to eradicate violence especially gender-based Violence at all levels for better quality of life for the country. GBV calls for political commitment from the policy makers, executive and the judiciary.’

Rise in gender-based violence
https://swazimedia.blogspot.com/2017/12/rise-in-gender-based-violence.html
at 1:00 AM