Making media freedom in Swaziland is more than a dream

Magazine editor Bheki Makhubu, in spite of harassment from King Mswati III and his cronies, is undeterred in his bid to expose the regime’s wrongdoings. 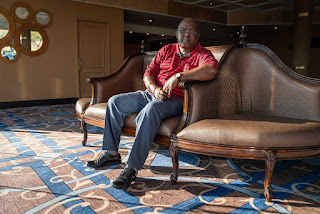 The role of dissenting journalists in eSwatini (formerly Swaziland) is more crucial than ever before. But the grimy reality is that critical journalists left in Africa’s last absolute monarchy are rare to find. Bheki Makhubu, an editor of eSwatini’s monthly political magazine The Nation, is one of the few remaining in the landlocked country who isn’t scared to speak out.

“I’ve always understood that the media by its nature calls out authority and it protects the public interest,” he says. “I think by nature of human existence, people in authority need to be monitored and called to account, because otherwise, they tend to forget why they are there and sometimes they are not aware of what they are supposed to do; we need to remind them of their functions.”

To call authorities to account in eSwatini is, however, almost an impossible task because of the regime’s repressive laws towards dissidents. “This country is run by bullies,” Makhubu says at his magazine’s offices in the country’s capital, Mbabane. He frequently publishes critical stories against King Mswati III and his stooges. While working for the Times of Swaziland, the country’s oldest newspaper, Makhubu once wrote that the king is a “businessman”, a remark that forced him to issue an apology to the ruler after the paper was put under immense pressure.

On 17 March 2014, Makhubu and activist and human rights lawyer Thulani Maseko were jailed for 15 months for criticising eSwatini’s former chief justice Michael Ramodibedi. This was after a government vehicle inspector whose job it is to check whether government cars are authorised to be on the road requested authorisation from a chauffeur driving a judge in a government vehicle. Both the judge and chauffeur allegedly refused, resulting in the impounding of their car.

No one should be denied representation

“Ramodibedi had [the inspector] arrested and charged with contempt of court,” Makhubu says, adding that the inspector had requested legal representation at court which Ramodibedi allegedly denied. “I then wrote an article saying that whatever power Ramodibedi might have, he does not have the power to deny anybody the right to legal representation,” Makhubu explains. For this, he and Maseko were thrown into jail.

Makhubu says these are tactics employed to deter journalists from assuming a watchdog role. “When I walked out of that prison, almost to this day they don’t know what to do with me. I almost got complete freedom,” he says.

It’s not only journalists who interrogate officials’ actions who are deterred from pursuing what’s truly in the public interest. Makhubu says citizens of eSwatini are also barred from practising their sacrosanct rights – to debate issues directly affecting them.

“EmaSwati might say they are not oppressed because the king is there to take care of those he can take care of,” he says. “All we have to do is be on his downside. I find it utterly disgusting. As emaSwati we are not some kind of [ethnic group] lost somewhere in medieval times without any consciousness. People in this country are highly educated but they don’t like it to be known what they know, because they don’t know who they might offend.”

Grammar rules and fear of authority

Making an example of how an appetite for debate in eSwatini has been lost, Makhubu highlights how grammatically incorrect the word Eswatini is. It’s what appears on government letterheads, describing the country itself. He explains that the “s” should be capitalised regardless of any context as it represents a group of people. However, only the “e” in the word is capitalised, which ought to be so only in the beginning of a sentence.

“I’ve challenged a few experts on the isiSwati language as to why the ‘s’ is [lower case],” he says. “Nobody wants to answer. In a vibrant society, those people who know better would have stood up. But you might do that and question this guy in authority who does not know better than you, he might make your life miserable and victimise you. People are scared of that and I think that’s the saddest thing that has happened at eSwatini.”

Makhubu says the fear to speak out and to challenge the regime has escalated to the point that there’s a naturalised perception that the country only belongs to the king. “Politics over the years has tended to shift towards making everybody believe that [the country] is a real estate belonging to the king and we are simply squatters on somebody’s land. And in fact, even those who paddle that point do it for political reasons, because they know it’s not true. They say it because it’s good for the king’s ego. Unfortunately, this is done at the cost of others,” he says.

One particular case that demonstrates how far the king’s iron-fisted hand could go to compromise the rights of others is his “unthinkable act” almost two decades ago, which remains a “sore point to emaSwati.” In July 2000, the king forced two chiefs to surrender their chieftaincy status so that his older brother, Prince Maguga, could assume a chieftaincy role in both villages which are about 25km apart.

The king does what he likes

The chiefs did not cede to the order which led to the king issuing an order through the Ministry of Home Affairs to evict them along with their supporters. The chiefs and some of their supporters are still living in exile in South Africa. The king “exercised authority he did not have. Those who advised the king were trying to assert this untruth that he can do as he likes when he likes,” Makhubu says, adding, “The king’s powers are in the main constrained by Swazi laws and customs. He cannot act outside customary law on matters touching culture and tradition.”

The media has a role to challenge this perception and “to tell emaSwati that their rights are not dependent on anybody’s wishes.” However, since constructive debates are muzzled and those deemed dissidents are threatened with jail, the media is unable to effectively play its watchdog role. It’s only through Makhubu’s political magazine, with a circulation of about 5 000 copies, that he tries to push back the narratives of the establishment.

“As a [member of the] media, I don’t see myself as a political activist. I’m a journalist and I do what I do to expose the wrongs. I am not trying to lead any revolution. This freedom that I seem to have alone, sort of has made me say, ‘let me continue doing what I do. Perhaps people will be inspired by it,’” Makhubu says. But if the citizens are not inspired enough to take action, “I write to record it to history, to say to the people who will be living in Swaziland in 3019, that there were people who saw [the wrongs] and spoke about [them].”

This article was first published by New Frame.
https://www.newframe.com/making-media-freedom-in-eswatini-is-more-than-a-dream/

Journalists ‘scared to do their jobs’
https://swazimedia.blogspot.com/2018/01/journalists-scared-to-do-their-jobs.html

Journalists in Swaziland endure year of harassment as they try to do their jobs
https://swazimedia.blogspot.com/2019/05/journalists-in-swaziland-endure-year-of.html

Journalists jailed to deter others
http://swazimedia.blogspot.com/2014/07/journalists-jailed-to-deter-others.html