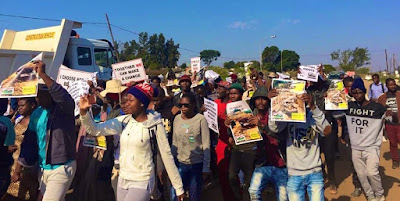 Hundreds marched at Malkerns in Swaziland / eSwatini to protest the forced eviction of peoplelast year who have been left homelss and destitute.

It happened on Saturday (18 May 2019) and was jointly organised by a variety of civil society organisations.

Times Sunday, reported one of the evicted people saying, ‘We eat from the bins as we do not have homes and cannot practice farming.’

The newspaper also reported Mhlatase Dlamini saying, ‘Our houses were brought down and our belongings were taken and dumped. My children are all over and eat from dustbins.’

In April 2018, Dozens of people, including 33 children, were left homeless after their homes at Embetseni were demolished using bulldozers in the presence of 20 armed police.

At the time Amnesty International called to  people across the world to protest. Amnesty said the evictions were in violation of international human rights standards.

In a statement it said four homesteads with 61 people, including 33 children, were forcibly evicted from a farming area. It said, ‘Representatives of a private farming company that owns the land together with the Sheriff of the High Court of Mbabane and armed local police officers were present during the demolition of the homesteads. They arrived in the morning and told the families to remove their belongings from their homes if they did not want them destroyed during the demolition. Afterwards, bulldozers demolished the four homesteads.’

The Swazi High Court had in July 2017 ordered their eviction.

Amnesty added, ‘In violation of international human rights standards, residents of the homesteads were not given adequate advance notice of the eviction and were not provided with alternative housing thus rendering them homeless, and at risk of other human rights violations.’

Forced evictions across Swaziland, where King Mswati III rules as an absolute monarch, are common. Farmers have been evicted from their land to expand the monarchy-controlled sugar industry for decades.

American independent watchdog organization Freedom House stated in a press release from 2013 that the Swazi police ‘are increasing pressure on farmers resisting their unlawful evictions from land that they have occupied for generations.” A report from the organization on Swaziland from the same year concluded that, “in Swaziland, property is insecure, and rightful owners have no effective redress in the legal system which places the king above all laws.’

Evicted farmers take on Swaziland absolute monarch to get their land back
https://swazimedia.blogspot.com/2019/01/evicted-farmers-take-on-swaziland.html