King Mswati III, the absolute monarch of Swaziland / Eswatini, is reportedly hiding US$30 million of money from Libya for his friend Jacob Zuma, the former president of South Africa.

The Sunday Times newspaper in South Africa reported (7 April 2019) that the money was secretly moved to Eswatini earlier this year from Zuma’s Nkandla residence where it had been hidden. The money had reportedly been given to Zuma by late Libyan dictator Muammar Gaddafi.

A high-ranking intelligence source told the Sunday Times that its investigations had revealed that the money had been moved in five tranches from Nkandla and transported to Eswatini.

King Mswati III reportedly confirmed the existence of the money to South Africa’s current President Cyril Ramaphosa during a meeting at OR Tambo International Airport in Johannesburg.

The AFP news agency reported, ‘According to the Sunday Times’ sources, Zuma travelled to Libya in 2011 with then intelligence minister Siyabonga Cwele, where the delegation offered the Libyan leader safe passage to SA as rebel forces closed in.

‘According to an insider, Gaddafi gave Zuma the cash, saying that if he was captured Zuma must find him a good lawyer to represent him at the International Criminal Court.

‘Gaddafi died while being chased by rebels in Tripoli in October 2011.’

The Sunday Times reported, ‘The money was said to have been transported out of King Shaka airport in Durban bound for Eswatini, where it was to be stored by the Central Bank of Eswatini.

‘But highly placed sources in the country said the bank’s governor Majozi Sithole refused to deposit the cash pile. Sorting out the cash pile was left to deputy governor Mhlabuhlangene Dlamini, who is related to the king.

‘“The deputy governor is involved. He is the one who went with JZ [Zuma] to go and count the money. He took some people at the bank, they apparently flew to King Shaka airport, counted out the money and brought it back. Majozi is refusing to put the cash into the system,” said an insider with links to both the royal household and the bank.’

The Sunday Times reported that according to government sources Zuma allegedly held the stash of high-denomination US dollar bills for several years in an underground vault at his luxurious home in rural Kwazulu Natal. Zuma handed it over to King Mswati of Eswatini after fearing he would face charges in South Africa over corruption allegations.

The newspaper said the Libyans had asked President Ramaphosa to help get the money back. It reported Gaddafi’s son Saif al Islam wanted to contest elections later this year.

King Mswati and Jacob Zuma have a close personal relationship. In October 2017 Princess Ziyanda, a member of the Swazi Royal Family, married Zuma’s son Mxolisi. The princess was the second member of the royal family to marry into the Zuma family, the Swazi Observer, a newspaper in effect owned by the King, reported at the time.

The Observer reported, ‘The Zuma family alone presented her [Princess Ziyanda] with close to E600,000 in hard cash.’ In Swaziland seven in ten of the population live on incomes less than E55 a day. The Zuma family also paid the King 121 cattle as lobola [bride price] for the princess.

King Mswati was a close ally of Gaddafi and made trips to Libya for talks about securing business and financial aid for Swaziland.

In 2002, King Mswati, made Gaddafi a Grand Counsellor of the Order of Sobhuza II, the royal palace’s highest honour and named after Mswati’s father.

One of the king’s sons, Prince Sicalo, underwent intensive military training in Libya.

King Mswati was both a political ally and a friend of Gaddafi. In 2001, when King Mswati was struck down with a mystery illness (widely believed at the time to be caused by deliberate poisoning) Gaddafi flew a team of doctors to Swaziland to treat the king.

In 2009, Gaddafi sent the king six camels as ‘a token of friendship’.

Both the Swazi and South African governments denied the existence of the money. It was reported by Africa News 24-7 that Zuma intended to sue the Sunday Times for defamation. 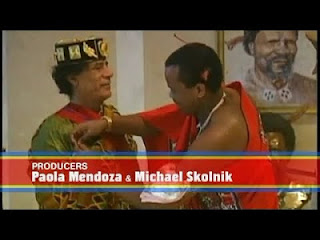 King Mswati, makes Gaddafi a Grand Counsellor of the Order of Sobhuza II. Picture: Without The King documentary