Remembering the Swaziland ‘uprising’ of 2011

It is 10 years since the attempted ‘uprising’ by pro-democracy campaigners against the Swaziland state and absolute monarch King Mswati III. It started on 12 April 2011, organised through the Internet and attracted international attention.

It was inspired by the so-called Arab Spring where people in North Africa turned against their own repressive governments.

In Swaziland (since renamed eSwatini by King Mswati) political parties are not allowed to contest elections, the King appoints the Prime Minister, cabinet ministers as well as top public servants and judiciary. Those advocating democracy are prosecuted and jailed under the Suppression of Terrorism Act.

The Swaziland ‘uprising’ was brutally put down by state forces. Leaders were arrested and later jailed. The state violence was condemned across the world.

Amnesty International said at the time, ‘We are alarmed by the levels of state violence in the past 24 hours and the numbers of arbitrary and secret detentions witnessed during this period and fear that those targeted may be at risk of torture.’

The United States called ‘on the Government of Swaziland to respect the rights of all its citizens to freedom of assembly and freedom of expression, which are guaranteed by the Swazi Constitution and by international human rights instruments’.

April 12 marks the day in 1973 when King Sobhuza II tore up the country’s constitution and introduced a Royal Decree giving him full control over Swaziland. That Decree is still in place.

For moment by moment coverage of the 2011 ‘uprising’ follow this link. 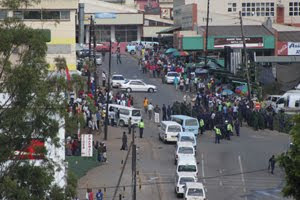 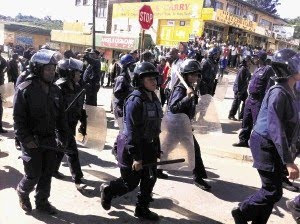 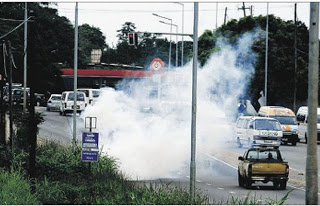