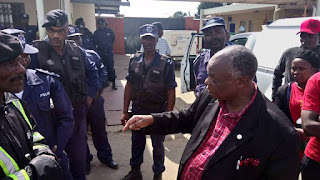 Leaders of Swaziland’s political opposition were stopped from crossing the border into South Africa to join a protest against the holding of political prisoners.

The People’s United Democratic Movement (PUDEMO) said police told them that an order to bar them from crossing the border had been issued but did not say by who and how it was drafted.

The Observer on Saturday newspaper in Swaziland reported those stopped had authentic travelling documents.

PUDEMO President Mario Masuku was among those stopped at the Ngwenya border crossing on Friday (11 May 2018). On the other side at Oshoek about 300 South African trade unionists and others had assembled to protest the imprisonment in Swaziland of Amos Mbedzi and other political prisoners.

Mbedzi, a South African, was sentenced to 85 years and six months in jail (with 25 years to be served) in Swaziland in 2012 after conviction by the Swaziland High Court on five charges including sedition and murder.

He had been arrested following an attempt to blow up a bridge near the Lozitha royal residence in September 2008. Two people with him died from injuries caused when the bomb exploded prematurely.

There was heavy police presence at the border while the protests went on the other side for about two hours.

Meetings on all topics are routinely banned in Swaziland. In 2013, the Open Society Initiative for Southern Africa (OSISA) reported that Swaziland was becoming a police and military state. It said things had become so bad in the kingdom that police were unable to accept that peaceful political and social dissent was a vital element of a healthy democratic process, and should not be viewed as a crime.

These complaints were made by OSISA at an African Commission on Human and Peoples’ Rights (ACHPR) meeting in The Gambia in April 2013.

OSISA said, ‘There are also reliable reports of a general militarization of the country through the deployment of the Swazi army, police and correctional services to clamp down on any peaceful protest action by labour or civil society organisations ahead of the country’s undemocratic elections.’

OSISA was commenting on the trend in Southern Africa for police and security services to be increasingly violent and abusive of human rights.

In particular, OSISA highlighted how the police continued to clamp down on dissenting voices and the legitimate public activities of opposition political parties prior to, during and after elections.

As recently as September 2017, police stopped a pro-democracy meeting taking place, saying they had not given organisers permission to meet. It happened during a Global Week of Action for democracy in the kingdom. About 100 people reportedly intended to meet at the Mater Dolorosa School in the kingdom’s capital, Mbabane.

In 2013, after police broke up a meeting to discuss the pending election, the meeting’s joint organisers, the Swaziland United Democratic Front (SUDF) and the Swaziland Democracy Campaign (SDC) said Swaziland no longer had a national police service, but instead had ‘a private militia with no other purpose but to serve the unjust, dictatorial, unSwazi and ungodly, semi-feudal royal Tinkhundla system of misrule’.

In April 2015, a planned rally to mark the anniversary of the royal decree that turned Swaziland from a democracy to a kingdom ruled by an autocratic monarch was abandoned amid fears that police would attack participants. In February and March, large numbers of police disbanded meetings of the Trade Union Congress of Swaziland (TUCOSWA), injuring at least one union leader.

In 2014, police illegally abducted prodemocracy leaders and drove them up to 30 kilometres away, and dumped them to prevent them taking part in a meeting calling for freedom in the kingdom. Police staged roadblocks on all major roads leading to Swaziland’s main commercial city, Manzini, where protests were to be held. They also physically blocked halls to prevent meetings taking place.  Earlier in the day police had announced on state radio that meetings would not be allowed to take place.

In 2012, four days of public protest were planned by trade unions and other prodemocracy organisations. They were brutally suppressed by police and state forces and had to be abandoned.

In 2011, a group using Facebook, called for an uprising to depose the King. State forces took this call seriously and many prodemocracy leaders were arrested. Police and security forces prevented people from travelling into towns and cities to take part in demonstrations. Again, the protests were abandoned.