Vast amounts of cash may have been looted from public funds during the double celebration to mark Swaziland’s 50th anniversary of independence from Britain and the absolute monarch’s 50th birthday.

The so-called 50/50 Celebrations took place over two days in April 2018. It was at this time that King Mswati III declared Swaziland would be renamed eSwatini, a name change that has been rejected by human rights activists.

The PAC identified a number of irregularities and lack of accountability by the Ministry of Home Affairs. These included the flouting of procurement procedures, payment of over E1.5 million to civil servants unlawfully supplying government, payment of over E5.6 million for decorations as well as the poorly supported and recorded payment of well over E600,000 for over-priced groceries.

This was revealed during a meeting in the Swazi parliament last week.

The inflow and outflow of cash donations to fund the event amounted to nearly E17 million (US$1 million) and as of March 2019 more than E327,000 remained in a bank account specifically created for the event.

Investigations revealed that some of the companies awarded contracts were owned by public officers which was illegal.

A parliamentary committee was told some of the supplied commodities were marked up by over 300 per cent. As an example one supplier charged E169 for a 1kg chicken.

The main 50/50 Celebration took place on 19 April 2018. At a party for 700 guests, King Mswati, who is sub-Saharan Africa’s last absolute monarch, wore a watch worth US$1.6 million and a suit studded with diamonds. Days earlier he took delivery of his second private jet which with VIP upgrades is reported to have cost US$30 million.

In separate celebrations the Queen Mother (Indlovukazi) gave the King a dining room suite made of gold for his 50th birthday and senior members of his government gave a lounge suite trimmed with gold.

He also received cheques totalling at least E15 million (US$1.2 million) to help pay for his birthday celebration. 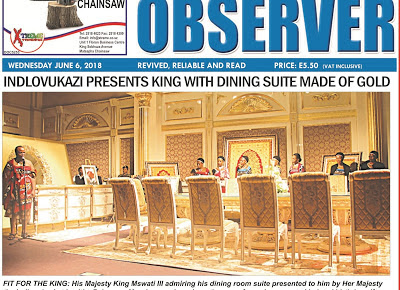 Back in 2018, the Swazi Government was reluctant to reveal the full cost of the celebration as online reports suggested it might cost as much as US$1 billion.

The Sunday Observer, a newspaper in effect owned by the King, reported that the Ministry of Home Affairs would not comment on the total cost of 50/50.

Ministry of Home Affairs Principal Secretary Steven Masilela told the Sunday Observer, ‘People suggesting the event was a drain on the public purse are misleading the nation at large.’

He would not give the true cost of the celebration but said ‘a large chunk’ of the money used came from donations from the business community and other institutions. He said Taiwan had given E15 million.

The newspaper reported, ‘Critics have claimed that the country’s priorities were not in order, directing public funds to the national event much against the need to address poverty and inequality.’

Funding of the event caused concerns in Swaziland. It was reported that the equivalent of US$1.7 million (E22 million) of public funds would be used on the event. E1 million of money intended to support poor and disabled people was donated by the Swaziland National Provident Fund. Army and police personnel had funds deducted from their salaries.

In Swaziland, seven in ten of the 1.1 million population live in abject poverty with incomes less than the equivalent of US$2 per day.

Swaziland is broke and Finance Minister Martin Dlamini in his budget speech on 1 March 2018 said the government would only spend on ‘the most critical expenditure items’ that year. He acknowledged, ‘Government sending continues to outpace its ability to raise enough revenues resulting in cash flow challenges and accumulation of arrears.’

In his speech opening Parliament in February 2018 the King commanded his government, ‘to prepare a budget that is based on available resources’. Dlamini said, ‘Government has conducted a thorough analysis of our expenditure in order to prioritise only the most pressing concerns.’

The Swazi Government paid US$7.5 million for a fleet of luxury BMW cars to transport dignitaries on the day. The cost of the cars alone bust the US$1.7 million budget the government allowed itself for the festivities.

Two months before the celebration, children in Swaziland were warned to prepare themselves for starvation as the government once again failed to deliver free food to schools. The Swazi Observer reported at the time that schools relying on government aid – known as the zondle programme – ‘must brace themselves for starvation as the Ministry of Education and Training has failed to deliver food to schools on time’.

In a report in May 2017, the World Food Program estimated 350,000 people of Swaziland’s population were in need of food assistance. WFP helped 65,473 of them. It said it was regularly feeding 52,000 orphaned and vulnerable children (OVC) aged under eight years at neighbourhood care points. About 45 percent of all children in thought to be OVCs. 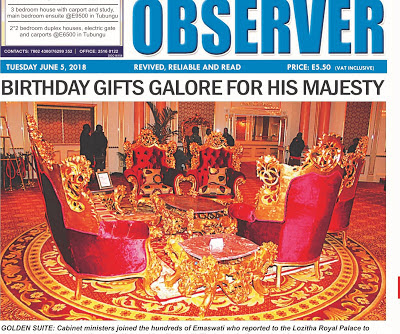