US Ambassador to Swaziland (eSwatini) Lisa Peterson has renewed her criticism of absolute monarch King Mswati III’s decision to buy his family a fleet of Rolls-Royce cars.

Reports on the number purchased have ranged from 13 to 15 and they were reported to have cost up to US$4 million.

Swaziland also bought him 126 BMW cars and motorbikes to escort the Royal family around the kingdom.

In an interview with The Nation, a monthly independent magazine in Swaziland, Peterson said, ‘Since the arrival of the Rolls-Royce fleet [in November 2019] I have both witnessed directly and heard about the level of anger among emaSwati [the people of Swaziland] over these cars that were “purchased privately.”

‘My initial anger was at the excessive luxury enjoyed by a tiny segment of the country, while 40 percent of the population lives on less than E29 per day [US$2], according to the World Bank.’

She added that people in Swaziland felt bound by ‘a cultural expectation’ to keep quiet while more powerful people took advantage of their goodwill and respect.

She said, “Goodwill and respect should be earned based on a person’s actions, which must be guided by giving the utmost consideration to human dignity.

‘They require that a person deal honestly with those around him, particularly those who depend on his conscientious leadership. By always dealing honestly, a leader gains the trust and respect of his public.’

Ambassador Peterson said the United States taxpayers invested E7.5 billion (US$500 million) in Swaziland for the fight against HIV and AIDS. She hinted the future of this investment was threatened.

She said, ‘If your brother’s family is sick but he doesn’t have the money to care for them, you assist without question.

‘But if your brother continues to count on you to pay for his family’s health care even after he buys himself a Rolls-Royce you will surely speak up to question how he can afford one and not the other.’

This was not the first time Peterson had criticised King Mswati for his lavish spending. Last month [November 2019] authorities in Swaziland said they wanted to censor her future public speeches after she criticised the King for his spending on the luxury Rolls-Royce and BMW cars.

An online newspaper the Swaziland News reported she was now under police surveillance.

Peterson had made comments while giving certificates to young entrepreneurs at Nhlangano on 8 November 2019.

A transcript of her speech issued by the US Embassy in Swaziland quoted her saying, ‘While the government continued using its existing vehicle fleet, the palace sees fit to acquire more than a dozen Rolls-Royce vehicles with a minimum  price tag of E52.5 million. To accompany this royal fleet, there is now an even larger fleet of official escort vehicles, purchased  with public funds.’

She said, ‘It is exceedingly difficult for development partners to continue  advocating for assistance to eSwatini when such profligate spending or  suspicious giving is taking place.’

She said, ‘However, should the people of eSwatini really be comfortable with such disregard for the perilous fiscal state of the country, particularly with so many of His Majesty’s subjects living below the international poverty line?’

Following her comments the former chief executive officer in the King’s Office, now Shiselweni Regional Administrator, Vincent Mhlanga, told the Eswatini Observer (formerly Swazi Observer), a newspaper in effect owned by the King, that he was angered by the Ambassadors speech.
The Observer quoted him saying, ‘Going forward, when she comes to the region for any activity or event, we need to first know what she will say.’

The Swaziland News reported, ‘The Regional Administrator said it was unfortunate that he was not present when the Ambassador made these sentiments, otherwise, he could have stopped her from continuing with the speech.’

The Swaziland News also reported that Ambassador Peterson was under police surveillance. It said plain clothes police posing as journalists took photographs of the Ambassador during her visit to Nhlangano.

eSwatini Police Spokesperson Superintendent Phindile Vilakati told the Swaziland News, ‘We go to any gathering and collect information, it’s not like we’re only targeting the American Ambassador. We have been doing this for a long time, collecting information for our files.’

Ambassador Peterson had previously criticised the absolute monarchy in Swaziland. In an article published in November 2018 by both of Swaziland’s two national daily newspapers she called for the decree that puts King Mswati in power as an absolute monarch to be repealed. She also called for political parties to be allowed to contest elections.

In 2016, after reports that three of the King’s wives had taken an entourage of 100 people on a shopping trip to Toronto, Canada, Peterson warned Swaziland that the kingdom might not receive further food aid from her country because of the King’s ‘lavish spending’ on holidays.

News24 in South Africa reported at the time Peterson said the US had limited funds for drought relief. She said, ‘When we hear of the lavish spending by the Swazi royal family – especially while a third of their citizens need food aid – it becomes difficult to encourage our government to make more emergency aid available. You can’t expect international donors to give more money to the citizens of Swaziland than their own leaders give them.’ 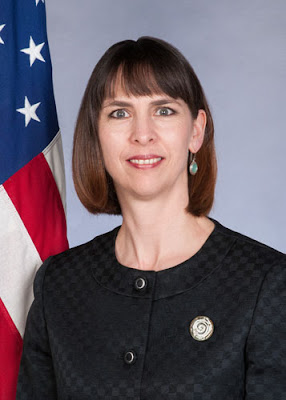