I met the real Super Mario 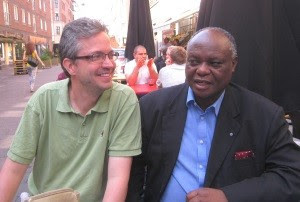 I cannot claim to have met Nelson Mandela. Or Steve Biko. Or Patrice Lumumba. Or Thomas Sankara. But I have met Mario Masuku – the former leader of Swaziland’s biggest democratic movement, PUDEMO, writes Peter Kenworthy of Kenworthy News Media.

Super Mario Bros. is one of the world’s most popular arcade and computer games – a game that my sons still love to play in newer versions. A game where the hero – Super Mario – has to endure all manner of dangers in trying to defeat the main villain or antagonist King Koopa – a large turtle who rules over the mushroom kingdom, has kidnapped Princess Peach, can breathe fire and uses black magic.

The Super Mario character first appeared in 1983 – the same year that Mario Masuku helped form The People’s United Democratic Movement, to try and ensure that liberation in Swaziland would lead to democracy, not the absolute monarchy of King Mswati that Swaziland had become and still is.

While I have never seen the real Mario literally jump on his enemies, like his computer namesake, he has nevertheless been incredibly important as an ongoing catalyst for the liberation movement of Swaziland – always bearing the hardships that come with being the leader of a liberation movement with calm dignity.

I have seen this myself, when I had met Mario through my work for the Danish solidarity Movement Afrika Kontakt (the former Danish Anti-Apartheid movement, now called Global Aktion) and through the party-to-party project between the Danish Red-Green Alliance party and PUDEMO.

Democracy and dictatorship
The first time I really heard of Mario Masuku was in March 2010. I was part of the Afrika Kontakt delegation in the Danish parliament who received a democracy award from the former Danish Finance Minister and Minister of Foreign Affairs (and future speaker of the Danish parliament and future President of the United Nations General Assembly), Mogens Lykketoft, on behalf on Masuku.

Mario could not be present, but sent a speech, where he said that he accepted the prize on behalf of all Swazis who fight and hope for democracy, stability and social justice.

I got to meet Mario in person for the first time in September 2010, where we presented him with the physical manifestation of the prize – a gilded megaphone. We talked about the connection between the struggle for democracy in apartheid-South Africa and in Swaziland, and how “Swaziland will be liberated by its own citizens, but aided by solidarity organisations in the way that South Africa won her freedom aided by the anti-apartheid movement,” as he put it.

Before me and my colleagues left, we were given a little sample of the “hospitality” that the Swazi regime usually reserves for PUDEMO members and others who demand democracy, when we were detained, beaten, interrogated and threatened by Swazi police, who claimed that our organization were aiding and abetting a “terrorist” organization, PUDEMO.

A taste of democracy
In November 2012, representatives of the Red-Green Alliance met with Mario Masuku and the leadership of PUDEMO and outlined the prospects for a partnership sponsored by the Danish Institute of Parties and Democracy (DIPD) – a government-funded institute that “support[s] political parties and multi-party systems in selected developing countries.”

In June 2013 Mario and I met with Mogens Lykketoft, who was now speaker of the Danish parliament for lunch in his office.

“I was very pleased to be able to meet Mogens Lykketoft,” Masuku told me at the time. “Swaziland is famous for all the wrong things. For having the highest aids-prevalence in the world, for nearly 70% of the population having to live on under 1$ a day, and for being the country in the world that spends most on the military per capita, even though we have no external enemies.”

In November, I was lucky to be the person in charge of Mario Masuku’s visit to Denmark through the DIPD-project. Here we followed the Danish Municipal elections in my own municipality, Gladsaxe, where we talked to the Mayor and other members of the City Council and followed the elections closely – amongst other things looking in on the counting of the ballots and talking to civil servants and voters.

“I am surprised that Danish political parties are always looking for consensus. The ownership and respect for the process by the Danish people shows – why can’t we learn from that. We come from the old British political system where we are always contesting,” Mario told me.

Released into the ‘big prison’
In August 2014 Mario Masuku was yet again imprisoned by King Mswati’s dictatorial regime, together with Maxwell Dlamini, who was Secretary General of PUDEMO’s youth league, SWAYOCO, at the time. This time on charges of terrorism for having shouted “Viva PUDEMO” at a union rally on May Day. I helped run a campaign for his release in Denmark.

“The trial of Mario Masuku and Maxwell Dlamini was brought up during the recently held political consultations between the EU and Swaziland on the 2nd and 3rd of October regarding the Cotonou Agreement, at the request of the Danish Ambassador,” Lidegaard said.

During the meeting, the Danish ambassador urged Swaziland to comply with the demands of the ongoing AGOA-negotiations, which should include the adaption of laws such as Swaziland’s Suppression of Terrorism Act, a bill that Amnesty International has called “inherently repressive”.

Hundreds of unions, parties, politicians and individuals from all over the world signed a petition to demand the release of Mario Masuku and Maxwell Dlamini, including the International Trade Union Confederation, British trade union federation UNISON and the African National Congress. In July 2015 they were finally released “into the big prison that is Swaziland,” as Masuku put it.

Conquers the kingdom
I have met with Mario every time I have visited Swaziland and stayed in touch with him when back home, on occasion interviewing him over the telephone for articles on matters such as the talks about talks with the regime or Swaziland assuming the chairmanship of SADC.

I have never met two of my heroes – Steve Biko and Nelson Mandela. But I believe myself to have been fortunate to have met and interacted with Mario Masuku.

A leader who has been manhandled by police, had his house raided in front of his children, been put under house arrest, charged with terrorism, detained and jailed in harsh and unbecoming conditions detrimental to his health – so much so that he calls prison “my second home”. Simply for peacefully demanding democracy.  But also a man who has always acted in a calm and respectful manner that becomes a true leader.

Last year Mario Masuku stepped down as leader of PUDEMO, and Mlungisi Makhanya took his place. But I hope that Mario Masuku, through his decades-long battle for democracy in Swaziland, has helped set the scene for something similar in the kingdom of Swaziland.

The article was also published on the eSwatini Institute of Alternative Ideas site.

Release of leaders ‘changes nothing’
http://swazimedia.blogspot.co.uk/2015/07/release-of-leaders-changes-nothing.html
at 12:01 PM

Wow, amazing block structure! How long
Have you written a blog before? Working on a blog seems easy.
The overview of your website is pretty good, not to mention what it does.
In the content!
https://softwarezpc.com/panda-antivirus-pro-crack/