Bheki Makhubu, a magazine editor in Swaziland (eSwatini), has written that absolute monarch King Mswati III is ‘unhinged’. He also called the king ‘a first class narcissist who no longer identifies with his people’.

Makhubu made his comments in the November 2019 edition of the Nation, a magazine that supports democracy in the kingdom.

Makhubu gained international attention in 2014 when he and writer and human rights lawyer Thulani Maseko were sentenced to two years in jail after writing and publishing articles in the Nation that were critical of the Swazi judiciary.

They were released by the Swazi Supreme Court on 30 June 2015 after they had served 15 months of their sentences.

In his latest article, Makhubu criticised the king for taking delivery of a fleet of 15 Rolls-Royce cars for himself and his wives while public servants were being beaten by police on the streets as they marched for more pay. The cars were reported to have cost about US$6 million.

He wrote, ‘In truth, luxury does not even begin to describe those vehicles. Custom made to order, some of them even arrived in the most ridiculous of colours, such as pink.’

Makhubu’s article is significant because freedoms of the media, speech and information are severely restricted in the kingdom. State broadcasting is heavily censored by the Government whose members are not elected by the people, but chosen by King Mswati. Of the only two daily newspapers in Swaziland, one is in effect owned by the King.

Makhubu wrote, ‘After 33 years on the throne, wielding absolute power over a docile people who accept his every word as gospel, King Mswati has now assumed a godly status. He sees himself as the 14th Apostle, after the 12 who followed Christ on earth and the 13th who said he has seen the Almighty in His glory in heaven on the road to Damascus.’

Makhubu added, ‘It is difficult to shake away a sense that, as our government continues to moan about a depressed economy, with ordinary people continuing to sink deep into grinding poverty, King Mswati has himself detached from all this. He doesn’t believe he owes us anything.’

He concluded, ‘Our king is feeding alone at the trough. Our king has abandoned us.’

In 2015 a report from the International Commission of Jurists (ICJ) concluded the arrest and detention, trial, conviction and sentencing of Makhubu and Maseko, ‘involved multiple violations of the Constitution of the Kingdom of Swaziland, the African Charter on Human and Peoples’ Rights, the Principles and Guidelines on the Right to a Fair Trial in Africa and the International Covenant on Civil and Political Rights.’ 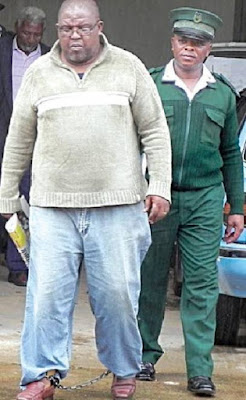 Bheki Makhubu in chains during his 2014 trial: Picture source Facebook

Making media freedom in Swaziland is more than a dream
https://swazimedia.blogspot.com/2019/08/making-media-freedom-in-swaziland-is.html