King Mswati III, the absolute monarch of impoverished Swaziland (eSwatini), has taken delivery of 79 luxury BMW cars worth about US$6 million.

This happened a week after he took delivery of 15 Rolls-Royce cars.

The Sowetan newspaper in South Africa reported details of the purchase on Friday (8 November 2019).

It reported, ‘Yesterday, 12 trucks loaded with the latest model BMW X3 SUVs and BMW 540 sedans, mostly navy blue in colour and a handful of them in white, waited for hours in Carolina, about 100km from the Oshoek Swazi border post. The 12 trucks took almost the entire truck stop parking space in the small Mpumalanga town.

‘The spanking new fleet was transported from the BMW Rosslyn plant to Manzini in eSwatini in abnormal load trucks with some carrying as many as eight vehicles a truck.

‘Although it's unclear what the intended use for the vehicles is, most of those navy blue were already fitted with roof top blue lights.’

The Swaziland News, an online publication, reported the cars would be used by escorts of the Swazi royal family.

The Times of eSwatini reported, ‘Sources claimed that a large number of BMWs would be delivered in the country and they would be used as escorts. They also claimed that government did not have the money to buy the cars upfront so it signed a letter of commitment but the claims could not be verified.’

The Sowetan reported that15 ultra-luxury Rolls Royce cars had been shipped into South Africa through the Durban port and delivered to the royal palace at Manzini, Swaziland, a week ago.

It added, Daytona, which was understood to have facilitated the importation of the king's Rolls-Royces, would not disclose any customer details or purchase information but confirmed it was the sole importer of Rolls-Royce motor cars in Southern Africa.

Minister of Finance Neal Rijkenberg refused to answer questions about the purchases in the House of Assembly, the Times reported.

Rijkenberg did say that Swaziland presently had a public debt of E18.6 billion (US$1.2bn). He had been trying to negotiate loans of E2 billion to pay suppliers.

Public services across the kingdom are in meltdown. At least six children were reported to have died  from diarrhoea in August 2019. Drugs to treat them were unavailable.

In August 2019 the Ministry of Health confirmed in its first quarter performance report delivered to the Swazi parliament that drugs had run out and there were shortages of nurses, midwives and other health professionals. Fuel frequently ran out and ambulances and other vehicles had broken down.

The government has not paid schools fees and support staff have been sacked as a result. Teaching supplies have run out and in some school pupils have been without a teacher for more than a year. Some programmes to feed destitute children at school have been stopped because of lack of funding.

About seven in ten of the estimated 1.3 million population live on incomes less than the equivalent of US$2 per day. On the day news broke of the king’s multi-million dollar purchase it was announced that bread prices would rise. 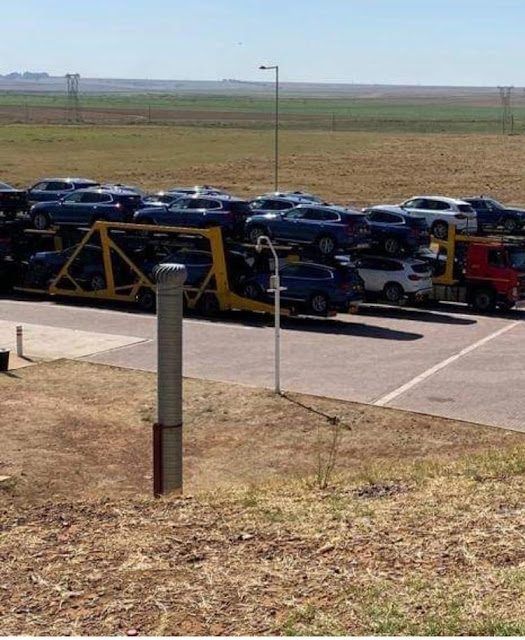 Some of the BMW cars purchased being transported to King Mswati. Picture souced from Facebook. 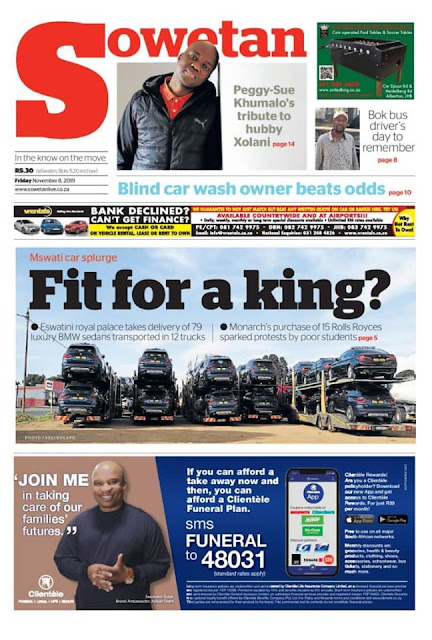 Front page of the Sowetan newspaper