King Mswati III, the absolute monarch, of impoverished Swaziland (eSwatini), has spent about US$15 million on 19 top-of-the-range Rolls-Royce cars for his wives and a customised Rolls-Royce Cullinan SUV for himself, according to reports.

Photographs of the cars appeared on news sites in South Africa and Zimbabwe and have also been widely circulated on social media.

The Citizen newspaper in South Africa reported, ‘A source, from eSwatini’s Ministry of Information Communications and Technology, confirmed to The Citizen that the King had indeed bought the vehicles. She said the vehicles arrived on Tuesday [29 October 2019] but was unsure on the exact number of the cars.’

The Citizen said video of the cars had been circulating on social media. It added, ‘Footage of the cars only shows a few of the similar-looking Rolls-Royces driving out of what seems like a compound, still with a few stickers indicative of their new nature.’

Exact details of the purchase and the costs have not been officially confirmed by the Swazi Government. Reports on social media put the total number of vehicles at 20.

The exact number of wives King Mswati has is not clear as this is considered sensitive information within Swaziland. It is thought that after deaths and defections the number presently stands at 13.

The purchase is just one of the many extravagances of the King and his family. In 2018 at his 50th birthday party he wore a watch worth US$1.6 million and a suit weighing 6 kg studded with diamonds. Days earlier he had taken delivery of his second private jet. This one, an Airbus A340, cost US$13.2 to purchase but with VIP upgrades was estimated to have cost US$30 million.
The King also has 13 palaces.

He also received other gifts, including five of the latest 65-inch TV sets, portraits, jewellery, clothing and more than 100 cattle. In total the gifts for his 51st birthday were worth E6.8 million, according to the Swazi Observer, a newspaper in effect owned by the King.

The money King Mswati received included E300,000 from the Public Service Pensions Fund which is set up to provide members with retirement annuities, death benefits, disability benefits and other pension-related benefits.

The King took the gifts just after news broke in Swaziland that people were dying because of the lack of medicines in hospitals. Schools across the kingdom were struggling to feed malnourished children. The government, which is not elected but handpicked by King Mswati, is broke and cannot pay its suppliers.

Meanwhile, seven in ten of the estimated 1.3 million population of Swaziland live in abject poverty on incomes less than the equivalent of US$2 per day.

The presents the King received were modest compared to those he was given in 2018 for his 50th birthday. The Queen Mother gave him a dining room suite made of gold. It went alongside a lounge suite trimmed with gold that he was given by senior members of his government. He also received cheques totalling at least E15 million. 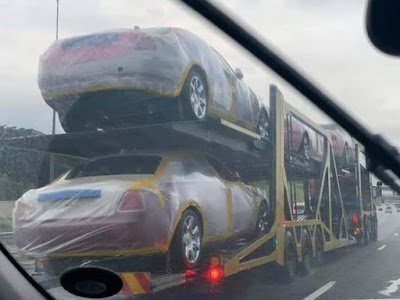 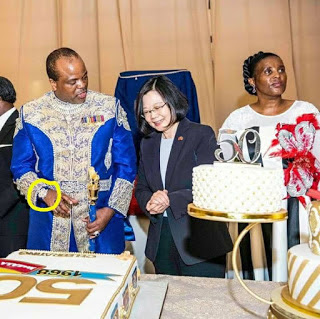 King Mswati III with Taiwan President Tsai Ing-wen and one of his 13 wives, Inkhosikati LaMotsa during at his 50th birthday party. He is wearing both the US$1.6 million watch and the suit beaded with diamonds. Picture: Government of the Republic of China (Taiwan) 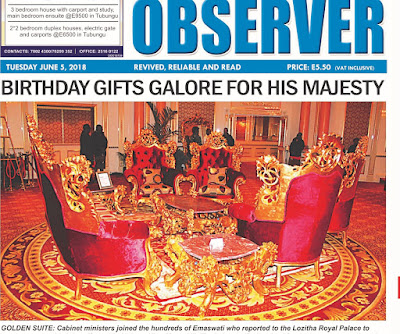