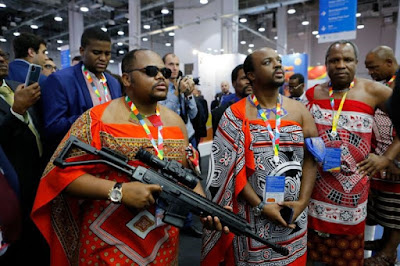 The Swazi delegation are impressed with the Kalashnikovs. Picture: Quartz


King Mswati III, the absolute monarch of Swaziland (eSwatini), and members of his delegation attended a trade fair in Russia to investigate the latest military hardware offered for sale to African countries.

It happened at the Black Sea city of Sochi on the opening day of the inaugural Russia-Africa Summit.
Russian president Vladimir Putin gave an introductory address that positioned its renewed push in the continent in the Soviet tradition of fighting colonialism.

The Quartz website reported, ‘Russian officials argued deals with the modern Russia offered African states their “independence” presumably implying deals with former colonial powers like France and the UK or global powers like the United States or China come with strings attached one way or another.’

Although deals in nuclear energy, oil, gas, agriculture, and diamonds took a prominent place, two of the main attractions for African heads of state were military cooperation and military hardware, Quartz reported.

Swaziland is a desperately poor kingdom where seven in ten of the estimated 1.3 million population have incomes less than the equivalent of US$2 per day. Military spending by Swaziland, according to estimates published by the  Stockholm International Peace Research Institute (SIPRI), for the current year is expected to reach US$87.8 million (E1.3bn in local currency). For 2017, spending was estimated at US$88.7 million and for 2016, US$86.3 million.

The figures amount to about 1.5 percent of Swaziland’s total gross domestic product (GDP).

SIPRI states military expenditure data is based on open sources only, meaning on publicly available data. The true figure might be higher.

The high military spending comes at a time when Swaziland is broke. In the 2018 national budget all government job recruiting was frozen. It was announced Value Added Tax would go up by 1 percent to 15 percent and there was a plan to try to impose VAT on electricity tariffs for the first time. Pensions for people aged 60 and over were frozen.

Swaziland which is not a democracy has been criticised for many years for the way state forces oppress the people. Political parties are banned from taking part in elections and groups that advocate for democracy are outlawed under the Suppression of Terrorism Act. Swaziland is a landlocked country and has no disputes with neighbours.

The Open Society Initiative for Southern Africa (OSISA) at the African Commission on Human and Peoples' Rights (ACHPR) meeting in The Gambia in 2013 said the King was turning Swaziland into a ‘military state’.

In a report OSISA said, ‘There are also reliable reports of a general militarization of the country through the deployment of the Swazi army, police and correctional services to clamp down on any peaceful protest action by labour or civil society organisations ahead of the country’s undemocratic elections.’

In 2009, the Swazi Government was revealed to be engaged in arms dealing by the United States. A diplomatic cable written by Maurice Parker, the then US Ambassador to Swaziland, and later published by WikiLeaks, revealed that the UK Government had blocked an arms deal between a UK company Unionlet and the Swaziland Government because it feared their ‘possible use for internal repression’.

The Swazi Government wanted to buy equipment worth US$60 million.

The Swaziland Government said it wanted the items to fulfil its United Nations ‘peacekeeping’ obligations in Africa.

The UK Government did not believe it and thought either the weapons would be used against the Swazi civilian population, or they were being bought in order to sell on to another country, possibly Iran. The UK Government blocked the deal.

In his diplomatic cable, Parker said, ‘The array of weapons requested would not be needed for the first phases of peacekeeping, although it is possible someone tried to convince the Swazi government they were required. The GKOS [Government of the Kingdom of Swaziland] may have been attempting to build up domestic capability to deal with unrest, or was possibly acting as an intermediary for a third party such as Zimbabwe or a Middle Eastern country that had cash, diamonds or goods to trade.’