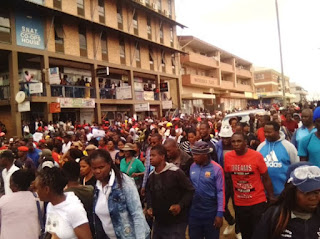 Protestors in Swaziland during the strike. Pictured from Facebook

In a letter sent to Swazi Prime Minister, Ambrose Mandvulo Dlamini, on Tuesday, the Norwegian Confederation of Trade Unions, LO Norway, protests against police firing rubber bullets and teargas at public sector workers on strike last week. Several of the strikers, who were demanding cost of living adjustments and a 7,85 per cent salary increase, were injured.

– LO Norway is shocked to learn that the General Secretary of the National Public Service and Allied Workers Union (NAPSAWU) was shot with live ammunition, requiring his urgent transfer to Raleigh Fitkin Hospital. LO Norway condemns in the strongest terms this brutal attack, part of the letter reads.

– In addition, your government directed the National Industrial Relations Court to have the strike declared illegal, under reasons of being a “threat to national interest”. We recall that the use of violence, even for purported reasons of internal security, constitutes a serious violation of human and trade union rights, the letter continued.

Others, including the International Trade Union Confederation (ITUC), Public Services International (PSI) and the Congress of South African Trade Unions (COSATU), have also condemned the conduct of the Swazi police.

– Respect for workers’ rights, good faith dialogue and a government that responds to people’s needs and concerns – just like any other country, this is what Eswatini needs, not state violence against the people. Eswatini’s King Mswati pledged to us earlier this year to build these bridges, yet now we are seeing the government pulling all stops to undermine them, said ITUC General Secretary Sharan Burrow.

– PSI condemns in the strongest terms the barbaric behavior of the Kingdom of eSwatini police who fired rubber bullets and threw teargas into crowds of striking workers who were only demanding a Cost of Living Adjustment they have not received for 3 years now. Workers attacked included Dumisani Nkuna, Secretary General of the Manzini Branch of our affiliates the National Public Services & Allied Workers Union (NAPSAWU), who was shot in the back, PSI said in a statement.
Public sector workers were last awarded salary adjustments in the 2015/2016 financial year and all negotiations with employers have not yielded any positive results, PSI added.

– We strongly denounce and rebuke the manner in which Swaziland police have dealt with the strike action. The peaceful workers’ protest turned into a battlefield when King Mswati once again set his gladiatorial “trigger happy” police force on unarmed civilians in the city of Manzini. Live ammunition, rubber bullets and tear gas were opened on 8000 workers who were demonstrating, as part of the public servants’ strike for an increase in cost-of-living salary payments, COSATU said in a statement.

In its annual Freedom in the World-report, independent watchdog organisation Freedom House concludes that “political dissent and civic and labor activism are subject to harsh punishment under sedition and other laws. Any criticism of Swazi culture and traditions or defacement of national symbols—including the king’s image—can draw fines and up to two years in prison”.

Swaziland police brutality under attack from international workers’ group
https://swazimedia.blogspot.com/2019/10/swaziland-police-brutality-under-attack.html
at 9:04 AM