It was the latest police violence at public protests in the undemocratic kingdom ruled by King Mswati III as an absolute monarch.

Public sector workers were on the final day of a three-day strike for a cost-of-living wage increase.
The violence happened at Mbabane after what local media called ‘a long day of peaceful protest’. Workers protested across the kingdom.

The 15 injured workers were treated at the hospital.

Among the shot protesters was a woman teacher who was hit multiple times in the back and leg. She had been in the back of a car that was carrying trade union leaders.

The Observer reported, ‘The emotional teacher blamed the police for shooting at them saying there was no need to open fire to an unarmed group of protesters.’

It added most of the workers who were injured were women and among them were three who were hurt while escaping from the police shots.

‘One teacher who was interviewed said she was trying to take cover from the police shots, but she fell to the ground and when she got up, it was when she got hit by the rubber bullet,’ the newspaper reported.

In the past police fired live bullets, rubber bullets and teargas at workers and demonstrators who had been legally protesting. In September 2018 during a three-day strike the streets of Manzini, the kingdom’s main commercial city, were turned into a ‘battlefield’, according to local media. The Swazi Observer, a newspaper in effect owned by King Mswati, said the bus rank in Swaziland’s major commercial city was ‘turned into a warzone as stun grenades, teargas, teasers and rubber bullets became the order of the day’.

Armed police had been deployed across Swaziland. Videos and photographs of brutal police attacks were uploaded on social media. The Southern Africa Litigation Centre (SALC) in a statement said the videos showed ‘unlawful police actions’.

The Swaziland Human Rights Network UK in a statement said, ‘The violent attack on peacefully demonstrating TUCOSWA [Trades Union Congress of Swaziland] members is reprehensible as it was a violation of their constitutional right to freedom of assembly and expression.’

That strike came after a series of protests and rallies which saw police violence in attempts to suppress the protestors. Police shot and wounded a schoolteacher at a vigil protesting their salaries in late August. Nurses in the kingdom’s capital city of Mbabane were tasered during a pay protest. 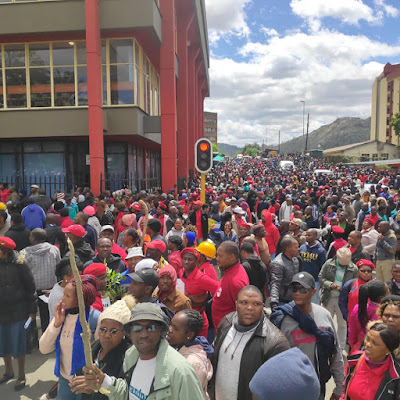