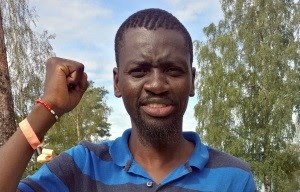 Bheki Dlamini had to flee his native Swaziland because he fought for democracy. Monday he voted for the first time – in Norway, where he lives in exile, writes Kenworthy News Media.

– Casting my vote got me thinking. This is my first ever vote and it is happening in a foreign land. In my homeland, Swaziland, I’ve never voted – simply because we don’t have multiparty elections. The elections in Norway serve as a source of strength in pursuit of freedom and democracy at home, says Swazi political activist, Bheki Dlaimini.

Political parties have been banned in Swaziland since 1973, and Dlamini had to flee the country after having been tortured and imprisoned by the regime for his role as a leading activist in Swaziland’s democratic movement.

– I have engaged myself in the fight for a free and democratic political space in Swaziland. A struggle that has been marked by permanent scars in my body, inflicted by Swaziland’s security forces, hence my vote here in Norway, Bheki Dlamini says.

Dlamini is humbled by the opportunity to influence the politics of the municipality in Bergen, where he has spent the last four years, he adds.

The election laws of Norway allow foreigners who have lived in the country for three years to vote in local elections, even though they have not attained Norwegian citizenship.

The largest political party in the Norwegian parliament, the Norwegian Labour Party, Arbeiderpartiet, criticised the absolute monarchy of Swaziland in a resolution presented at its national congress in April.

– Eswatini (formerly Swaziland) is one of the world’s last absolute monarchies. King Mswati has almost absolute power. While the population of Eswatini suffers from partial extreme poverty, the king lives an extravagant life of luxury.  Swaziland has the highest rate of HIV-Aids-infection per capita. But treating those who are infected or preventing further spread of the disease is not a priority, a statement from the congress read.

Swaziland held national elections in September of last year.  Voters in Swaziland elected 59 of Swaziland’s 69 members of the country’s House of Assembly at national elections. Absolute monarch King Mswati III picks the remaining ten, as well as most of the Senate, the Prime Minister and the Cabinet. Political parties were barred from participating in the elections.

In its annual Freedom in the World-report, independent watchdog organisation Freedom House gives Swaziland its lowest score of seven in regard to political rights. The report concludes that “Political dissent and civic and labor activism are subject to harsh punishment under sedition and other laws. any criticism of Swazi culture and traditions or defacement of national symbols—including the king’s image—can draw fines and up to two years in prison”.

In a poll conducted in 2015 by pan-African independent research institute Afrobarometer, only a third of the population saw Swaziland’s political system as democratic and only 28 percent were fairly or very satisfied with how democracy works in Swaziland (down from 36 percent in 2013).

Bheki Dlamini has a degree in Public Administration at the University of Bergen. He is a former President of the Swaziland Youth Congress and former Vice President of the International Union of Socialist Youth. The Swazi police’s torture of him by way of “severe beatings and suffocation torture” was mentioned in Amnesty International’s 2011 Annual Report.