Protest at Swaziland border calls for isolation of absolute monarch 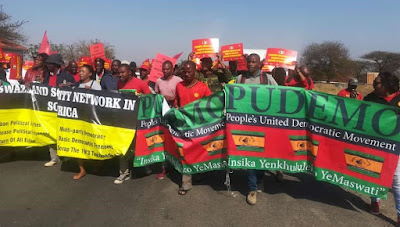 Members of a dozen organisations picketed the South African side of the Swaziland border to call for the kingdom’s absolute monarch King Mswati III to be isolated.

They want democracy in Swaziland where political parties cannot contest elections and groups that campaign for freedom are banned under the Suppression of Terrorism Act. The King chooses the Prime Minister and Cabinet ministers as well as top judges and civil servants.

The picket on Friday (26 July 2019) was led by the Congress of South African Trade Unions (COSATU) in KwaZulu-Natal. In a statement it called on all progressive forces to agitate for the economic and political isolation of the Mswati government. It said, ‘This campaign needs to be strengthened and intensified so that the exploited and oppressed people of Swaziland can be freed from the shackles of the Mswati regime.

‘Contrary to its false claims of peace and order in Swaziland, the regime is continuing to expose the people of Swaziland to serious sufferings and exploitation. The State is paralysed and the country is on the verge of collapse.

‘The people are dying because of the failing health system, children and women are raped, workers are striking and protesting for wage increases, taxes have escalated exorbitantly; university students are targeted and the judiciary is centralised by the individuals.

‘There is no quality healthcare programme, the education system remains untransformed, and the media freedom is non-existent.’

Among those participating in the picket at the Golela / Lavumisa Border were the Trade Union Congress of Swaziland (TUCOSWA) and two groups banned in Swaziland: the People’s United Democratic Movement (TUCOSWA) and the Swaziland Solidarity Network (SSN).