Schoolteachers in Swaziland want the United States to tell the kingdom’s absolute monarch King Mswati III to ‘stop wasting public resources’ on expensive overseas’ trips and use the money to pay salary increases to civil servants.
The request was made in a petition delivered to the US Embassy in Swaziland on Thursday (27 September 2018).

Teachers marched through Mbabane, the capital of Swaziland, (the kingdom recently renamed Eswatini by King Mswati) to deliver the petition. They had been blocked from taking part in a three-day strike this week by the Industrial Court.

Teachers and other civil servants want pay increases of 6.55 percent to meet changes in the cost of living. The Swazi Government says it is broke and has offered zero percent.

In what is believed to be an unprecedented move, members of the Swaziland National Association of Teachers (SNAT) asked a foreign government to intervene in a pay dispute. In a two-page letter addressed to the US Ambassador in Swaziland Lisa Peterson it said SNAT saw the United States as ‘defender number one of human rights and fundamental freedoms’.

Protestors were attacked by police and security forces with guns, teargas and stun grenades during recent protests over pay and one teacher was shot and wounded at a SNAT mass meeting on 24 August 2018.

In its letter SNAT said, ‘The Right to Freedom of Association and Assembly has been infringed upon by the state security organs.’

The letter asked the US Embassy to press the Swazi Government to pay the cost of living adjustment.

It also asked it to, ‘Engage members of the Royal Family, particularly the King, to stop wasting public resources with the huge and unnecessary delegations that normally accompany him abroad. [The King is presently at the United Nations General Assembly in New York].  The money that caters for their allowances can be used to pay civil servants, including teachers. The King may as well sell his private jet to fund teachers’ salaries.’

Teachers had their planned strike postponed until 23 November 2018 by the Industrial Court. SNAT said teachers would attend school but planned a series of events that would disrupt teaching.

King Mswati III who rules Swaziland as one of the world’s last absolute monarchs wore a watch worth US$1.6 million and a suit beaded with diamonds weighing 6 kg, at his 50th birthday party in April. Days earlier he took delivery of his second private jet, a A340 Airbus, that after VIP upgrades reportedly cost US$30 million. He received E15 million (US$1.2 million) in cheques, a gold dining room suite and a gold lounge suite among his birthday gifts.

Seven in ten of Swaziland’s 1.1 million population live in abject poverty with incomes less than the equivalent of US$2 per day. The King has 13 palaces. He also owns fleets of top-of-the range Mercedes and BMW cars. His family regularly travel the world on shopping trips spending millions of dollars each time.

The SNAT letter to the US Ambassador 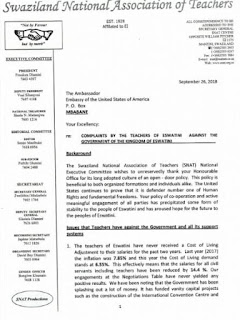 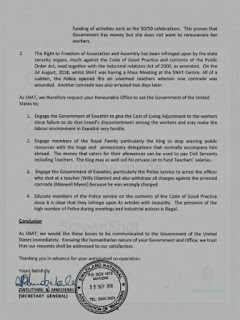 Vicious Attack by Swaziland Police on Defenceless Workers Captured on Video
https://swazimedia.blogspot.com/2018/09/vicious-attack-by-swaziland-police-on.html
at 10:08 AM