Police in Swaziland turned the city of Manzini into a ‘battlefield’ and ‘warzone’ on the second day of the national strike in the kingdom.

The Swazi Observer, a newspaper in effect owned by King Mswati III, the kingdom’s absolute monarch, said the bus rank in Swaziland’s major commercial city was ‘turned into a warzone as stun grenades, teargas, teasers and rubber bullets became the order of the day’.

It happened on Wednesday (19 September 2019) as workers across Swaziland continued their protests against poor pay and other working conditions. They are on a three-day stoppage coordinated by the Trade Union Congress of Swaziland (TUCOSWA).

The Observer, one of only two daily newspapers in Swaziland (recently renamed Eswatini by the King) where the media are heavily censored, said the bus rank was a ‘serious battlefield’ for more than four hours as armed police and other state forces and workers ‘engaged in fierce confrontation’.

The Times of Swaziland called it an ‘open battlefield.’

The Observer reported, ‘The situation got out of control when public transport drivers and conductors joined the protesting workers and clashed with the police.’

The Observer reported, ‘The town was totally shut down as shops were closed and street vendors halted business. Some terrified and frightened commuters sought refuge in offices and shops as the “war” between the police, bus conductors and workers took centre stage, unabated.’

The Observer reported police threatened ‘everybody who was wearing a red T-shirt’. People in Swaziland wear red to show their support for trade unions. It reported, ‘TUCOSWA quickly understood this strategy and changed their red T-shirts and wore other clothes.’

It added, ‘Efforts by the police to chase away onlookers proved futile as the public made it clear that they are not going anywhere until the strike is over and the kombis [buses] were back at the bus rank.

The Observer reported, ‘As early as 7 am, police officers and warders were sweeping the streets of Manzini, insulting and threatening to beat up anyone who was wearing a red T-shirt.

‘This prompted some TUCOSWA members to change their red colours and wear different T-shirts. The police went on to block any worker who tried to make an entrance to Somhlolo Park where members were supposed to join other workers.’

‘This sparked trouble for the police as conductors made it clear that they will not watch while their customers were being abused by the police. The public transport operators said since the roads were blocked, they could not carry out business anymore. All hell broke loose when conductors threw stones at the police officers and burnt tyres on the road.’

Police attacked members of the Swaziland National Association of Teachers (SNAT) at their union headquarters in Manzini. The Observer reported TUCOSWA Secretary General Mduduzi Gina, ‘said they received reports that some of the police officers stormed the SNAT Centre and ordered the teachers out of the premises but they told the police that they were in a meeting as the place was a private property, to which the police retaliated by throwing grenades at them inside the premises.’

The newspaper reported him saying, ‘While the teachers were running away for cover, they were assaulted by the police and some are reportedly missing.’

It added, ‘Gina said according to the report they received, one of the injured teachers was apprehended while trying to get medical attention from the paramedics who were at the scene when the attack happened.’

The Times of Swaziland reported, ‘The protesting workers were stuck at SNAT Centre as the armed police surrounded the building and threw stun grenades, while firing tear gas canisters at anyone leaving the venue.’

Protests have been taking place in more major towns and cities, including Mbabane, Manzini, Nhlangano and Siteki.

In Nhlangano, several union leaders were detained by the police, including SNAT Secretary General Sikelela Dlamini. The Observer reported, ‘There was pandemonium earlier in the morning when protesters clashed with the police at Zheng Young textile factory. Teargas was fired to disperse the strong crowd of workers. In town, police prevented people from walking in groups.’

The Observer reported that in Siteki, ‘people wearing red shirts had difficulty getting into town as uncompromising police officers prevented them from stepping foot into town. Also, people in the same T-shirts were told to immediately leave town.’

Armed police were deployed in Siteki as early as 8 am and union leaders who were known to the police were barred from entering the small town.

The Observer added, ‘Meanwhile, members of the public were also barred from entering the Siteki Park as it was used as a meeting point by protesters.’ Most schools in Siteki remained closed.

Swaziland holds its national election on Friday (21 September 2018). Political parties are banned from taking part. People are only allowed to elect 59 members of the House of Assembly; the King appoints a further 10. No members of the 30-strong Swazi Senate are elected by the people. The King chooses the Prime Minister and Cabinet members. He also chooses top civil servants and judges. 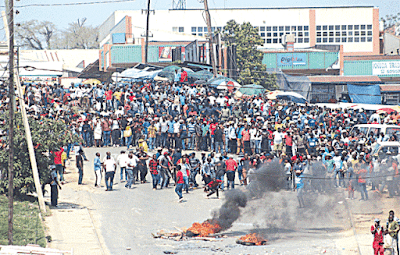 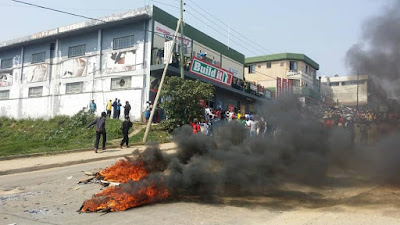 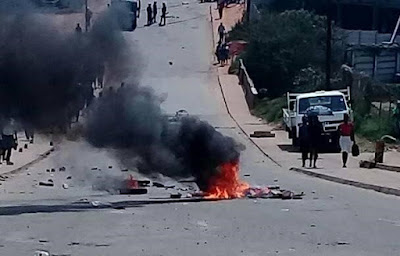