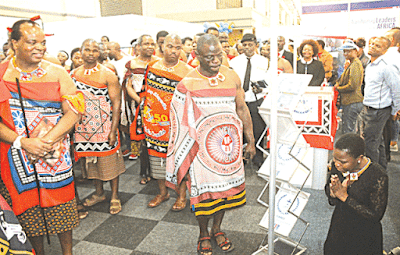 A female university student got down on her hands and knees in front of Swaziland’s absolute monarch King Mswati III and begged him for a scholarship so she could go to university.

He granted her plea.

It happened in full public view when the King visited the International Trade Fair at Manzini in Swaziland, the kingdom the King renamed Eswatini on his 50th birthday in April 2018.

The Swazi Observer a newspaper in effect owned by the King splashed the story on its front page on Monday (10 September 2018).

The Observer described Matsebula as ‘indigent’ and said, ‘It seems His Majesty King Mswati III was very touched by the student’s predicament and has given an instruction that she should be granted her wish.’

This was not the first time King Mswati’s subjects had ‘literally begged’ him for help. The Observer recalled the case of Hlob’sile Ndlovu who ‘a couple of years back jumped at an opportunity and pleaded for employment from the King. The King is still looking into her request.’

In July 2016 it was reported that desperately poor people camped outside the King’s office at Nkhanini  over many months to ‘beg’ the King for work. They said they would rather die than return to poverty, the Times of Swaziland reported at the time.

The Times reported, ‘However, on numerous occasions, the undeterred group would be told that there were currently no vacancies but would continue to sit and hope for a different answer.’

The newspaper reported the jobseekers said they ‘would rather die outside the gates of Nkhanini than to return to poverty’.

The Times reported, ‘They said they were sending a plea to Their Majesties to find it befitting to issue a Royal Command for them to be given jobs as they were currently ravaged by poverty.’

It added, ‘They said they were determined to go to Their Majesties to beg for the jobs.’

They had heard rumours that there were vacancies for jobs such as cleaning staff, groundsmen and other general duties, which did not require special skills in order to carry out.

Seven in ten of the estimated 1.1 population in Swaziland live in abject poverty with incomes less than the equivalent of US$2 per day.

The global charity Oxfam named Swaziland as the most unequal country in the world in a report that detailed the differences in countries between the top most earners and those at the bottom.

At his 50th birthday in April the Queen Mother gave the King Mswati a dining room suite made of gold. It went alongside a lounge suite trimmed with gold that he was given by senior members of his government.

The King has 13 palaces. He also owns fleets of top-of-the range Mercedes and BMW cars. His family regularly travel the world on shopping trips spending millions of dollars each time.

The Swazi Observer reported that more than E15 million had been given to pay for the so-called 50-50 Celebration that marked the King’s 50th birthday and the 50th anniversary of Swaziland’s Independence from Great Britain.

At least E1.6 million came from public funds. The Royal Swaziland Police Service and the Royal Correctional Service gave E300,000 each and the Public Service Pension Fund gave E1 million.
The Observer reported at the time King Mswati was in ‘a jovial mood as he received the gifts’.

Swazis Among Hungriest In The World
http://swazimedia.blogspot.com/2014/11/swazis-among-hungriest-in-world.html