Taiwan has denied donating more than a million US dollars to help fund the Swaziland King’s 50th birthday celebration.

However, a newspaper in Swaziland published a photograph of the cheque being handed over.

The Central News Agency in Taiwan reported the Ministry of Foreign Affairs denied a report from Swazi Media Commentary that it had paid US$1.7 million towards the 50/50 Celebration on 19 April 2018 that will mark King Mswati III’s birthday and the 50th anniversary of Swaziland’s Independence from Great Britain. The report appeared on a number of news sites.

‘“This [the report] is incorrect and absolutely false. We provided only a small amount of money for a fireworks show at the celebration,” Wu said, without disclosing the actual amount except to say it was less than the figure mentioned in the blog.’

In fact the figure donated was US$1.3 million. Swazi Media Commentary sourced its report from the Swazi Observer of 8 February 2018. The report included a photograph of a cheque for US$1,307,865 (the equivalent of E15 million in Swazi currency) being handed over by the Taiwanese embassy in Swaziland to the Swazi Minister of Home Affairs Princess Tsandzile and Minister of Economic Planning and Development Prince Hlangusemphi.

The Observer reported, ‘Taiwan Ambassador Thomas Chen, said the 50th anniversary is an important milestone in the course of the national development for the country.’

He added, ‘The year 2018 marks the 50th anniversaries of the birth of His Majesty King Mswati III and the independence of the country. Most Swazis don’t know that in September 1968, the government of the Republic of China on Taiwan sent an envoy to this country to seal the deal of diplomatic ties between our two countries.  For decades, Swaziland has proved itself Taiwan’s best friend in the African continent, for which the government and the people of Taiwan are truly thankful.’ 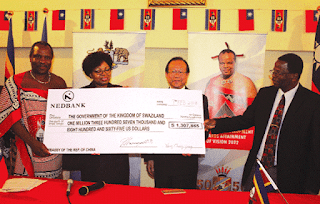 Picture from Swazi Observer shows the cheque being handed over by Taiwan Ambassador Thomas Chen.

SOLDIERS FORCED TO PAY FOR KING’S PARTY
https://swazimedia.blogspot.co.uk/2018/03/soldiers-forced-to-pay-for-kings-party.html
at 12:26 PM