Supporters of the banned youth organisation SWAYOCO briefly occupied the reception area of the Swaziland Consulate in South Africa yesterday (12 April 2013) as part of a day of activities to mark 40th years since the kingdom was stripped of its democracy.

The Gauteng branch of the Swaziland Youth Congress, (SWAYOCO) had to be negotiated out of the offices by police after briefly taking over the Consulate in Johannesburg.

SWAYOCO activists were joined by supporters of the Swaziland Solidarity Network and the People’s United Democratic Movement (PUDEMO), the best known of the opposition groups in Swaziland.

Political parties have been banned in Swaziland since 1973 when King Sobhuza II decreed that the constitution would no longer be honoured. King Sobhuza declared that henceforth he would be able to change or make laws as he wished.

The Royal Proclamation has never been properly rescinded since 1973 and the present king, Mswati III, rules Swaziland as sub-Saharan Africa’s last absolute monarch.

A statement from SWAYOCO said protesters at the Swaziland Consulate gave a petition of demands that included the unbanning of political parties and the repeal of the 1973 decree.

The statement said, ‘Led by PUDEMO Political Commissar Mlungisi Makhanya and Treasure General Mzamo Sikhonze, and joined by our comrades from NEHAWU and SSN, the battalion “occupied” the reception area, and while they waited to be attended to, burst into struggle songs and chanting political slogans demanding the release of SWAYOCO President Bheki Dlamini, Amos Mbedzi and Zonke Dlamini.’

The statement added, ‘Tempers flared with the Consulate charging that SWAYOCO was holding them hostage and thereby committing a criminal offense whilst SWAYOCO was arguing that they were giving the Consulate a piece of what Sobhuza subjected the Swazis to when he banned political parties. The confrontation was calmed when police were called and negotiated for a dialogue.’

‘Eventually the petition was received by Consulate senior staff Mr Tsabedze who was standing in for Consular Sigayoyo Magongo.’ 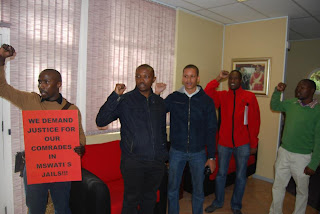 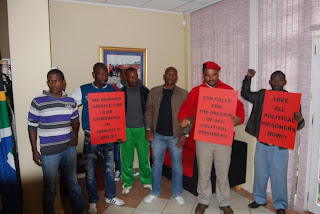 Unshakable solidarity with your brave souls and true patriots