The headline appeared on the Features and Opinion page, leading to speculation that the newspaper, in effect owned by King Mswati III, was making a statement about the punishment handed down to Bheki Makhubu, the editor of the Nation magazine.

Makhubu is set to start a two-year jail sentence tomorrow after High Court Judge Bheki Maphalala ordered him to pay a E200,000 (US$22,000) fine or go to jail. Maphalala ruled Mabhuza had ‘scandalised’ the court by writing two articles in the Nation magazine that criticised the Swazi judiciary.

Makhubu has already publicly said he cannot afford the fine. He is hoping to appeal the sentence.

The unusual move by the Swazi Observer has left readers of the newspaper puzzled as to the intent of the managing editor Mbongeni Mbingo. ‘Blank page’ protests have been made in the past by newspapers in other countries when they feel they are being censored.

However, the newspapers usually explain to their readers why they have not printed a story. Often, the reason is that the story the editor wanted to publish has been censored.

But, the Swazi Observer is known to be the most heavily censored newspaper in Swaziland. If the newspaper decided to leave a blank space where every censored story should be, there would hardly be any articles published.

The Media Institute of Southern Africa, Swaziland chapter, in a statement, said, the ‘blank page’, ‘seemingly criticises the decision of judge Bheki Maphalala, and, therefore, could be interpreted as an act to stand in solidarity with The Nation magazine’. 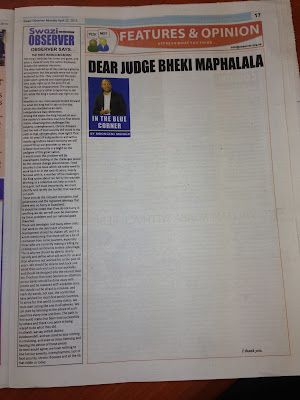 FUND SET UP IN BID TO PAY EDITOR’S FINE
http://swazimedia.blogspot.com/2013/04/fund-set-up-in-bid-to-pay-editors-fine.html

EDITOR SET FOR TWO YEARS IN JAIL
http://swazimedia.blogspot.com/2013/04/editor-set-for-two-years-in-jail.html
at 1:29 PM