US ATTACKS ‘TIMES’ OVER HATE ARTICLE

Makila James, the US Ambassador to Swaziland, has publicly backed readers who complained about an article in the Times Sunday that said battered women were ‘bitches’ and ‘most’ women who were beaten up by men brought it upon themselves.

James said, ‘While the author has a right to express his opinion, the Times Sunday also has a responsibility to decide whether or not to provide a platform to ill-informed and discriminatory views that justify the criminal actions of perpetrators.

She went on, ‘I would like to applaud those who wrote letters, signed petitions and spoke out against the content of the column and the decision to run it.’

In a letter published in the print edition of the Times Sunday (16 December 2012), but not on its website, James said, ‘Speaking out against intolerance and injustice is the first step towards creating a better society and a better world.’

The Times editors have refused requests from readers to apologise for publishing the article and the newspaper’s Ombudsman said it was ‘justified’ in printing it. 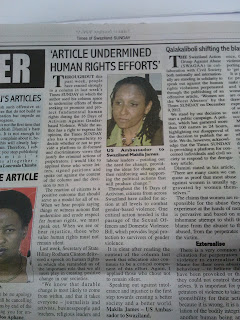