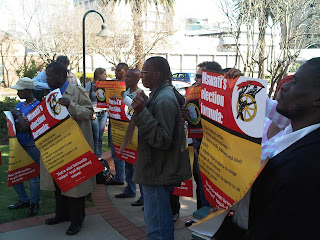 Statement from the Swaziland Democracy Campaign

On May 12th representatives of fifteen organisations gathered outside the Swazi Consular Office in Braamfontein Johannesburg to protest a number of burning issues face to face with Mr Magongo and Mr Tsabedze, the Consul and Deputy Consul respectively.

Three issues were raised directly with the representative of the Swazi Government. Firstly the chronic over-reaction of the Swazi Regime to the protests that took place in April, and in particular the unnecessary and brutal repression that was unleashed against legitimate peaceful protesters. The fact that the ILO and other world organisations have condemned the Swazi regime for their repressive actions has been further compounded by the behaviour of the Government in April. This has not served to undermine the democracy movement, but has strengthened the resolve of all those who want to see a democratic Swaziland.

Secondly, the illegal detention of young and courageous activists Comrades Maxwell Dlamini and Musa Ngubeni who were arrested during the April protests and who are being held on the flimsiest of evidence and denied bail. They face trumped up charges under the notorious Suppression of Terrorism Act, legislation that can only be described as draconian. Notice was also given of the detentions of other comrades in similar circumstances, namely Comrades Bheki and Zonke Dlamini. The SDC demanded the immediate dropping of all charges and the release of all those comrades detained.

Thirdly, that even though the Swazi Government had announced that they could not pay the May salaries of public sector workers they were still prepared to squander millions on sending a delegation of 50 to the UK Royal Wedding, and a delegation of 30 to a recent SACU meeting when most other governments sent three or four people. This underlies the absence of any rational prioritisation in economic matters, and has exposed the culture of wastage and personal wealth accumulation that typifies the regime.

Speakers from the African Diaspora, Global Zimbabwe Forum, PUDEMO , and COSATU also made similar and powerful points before the Consul replied that he would report these issues back to his superiors. Finally the Consul was informed that there would be very many more protests of this type and that the democracy movement was growing and that there would be no respite until Swaziland was a democracy.

We would like to thank all of those organisations who came and participated in the picket. Putting our words into practice and mobilising for democracy in Swaziland is one of the best ways that we can support our comrades in Swaziland. Passing resolutions, issuing press statements, circulating material on blogs and forums is all very well and important, but being prepared to actually do something speaks volumes. We urge all those who want to put their words into action to contact SDC for more information on future planned activities.