Violence and allegations of corruption and malpractice in Swaziland’s election have been reported from across the kingdom.

There were chaotic scenes in polling centres on Friday (21 September 2018), the APA news agency reported . Outbursts of violence started as early as noontime and intensified in the evening when the counting of votes was about to resume.

APA reported, ‘In some areas protesters who were not satisfied with certain procedures blocked vehicles transporting ballot papers to counting stations, resulting to delays in starting the counting process.

‘The bone of contention varied from last-minute change of counting centres to suspicions of malpractice by some candidates or their campaigning agents.’

APA reported at Manzini North, Manzini South, Sigwe and Ekupheleni centres the police had to request for backup from the Operational Services Support Unit (OSSU) after vehicles from the Elections an Boundaries Commission (EBC) were forced to turn back to polling stations for safety after roads leading to counting centres were blocked with stones and tree trunks by protesting crowds.

At Malindza in the Lubombo region, an intoxicated member of the army drove over a male voter and further crashed onto two cars that were parked within the polling station premises, APA reported.

Police fired gunshots in the air and grenades and rubber bullets as voters at Sigwe protested against completed ballot papers being taken away from a polling centre.

Social media platforms have been awash with accounts of vote buying and bribery, naming names and making detailed allegations. Mainstream media which are heavily censored have been more discreet following the vote in Swaziland (recently renamed Eswatini by absolute monarch King Mswati III.)

The Observer on Saturday reported police were called to the Manzini South constituency where one of the candidates for the House of Assembly ‘was accused of literally buying votes’ at the Divine Ministries auditorium, near St Michaels School.

It did not name the candidate. It reported one of the candidates had been tipped off that voters were being given E100 each to vote. In Swaziland seven in ten people are so poor they have incomes less than E30 a day. The newspaper reported that voters who had taken the money fled when police ‘stormed the auditorium’.

Agents for candidates were also reported to be giving away E20 notes at both Nkhanini and Sitjeni polling stations in Lobamba.

Gospel artist Mduduzi Simelane, the leader of Emagawugawu gospel group, won the election at Siphofaneni Inkhundla, but only after allegations of vote rigging at the so-called special election held on Tuesday for members of state forces and people who would be working at the election, according to the Swaziland News Facebook page.

The police riot squad was called to Makholweni polling station in Manzini North after a defeated candidate alleged a witchdoctor was present and was using muti (‘magic potions’) to influence people to vote for a particular candidate. He was also said to have illegally voted himself, the Observer on Saturday reported.

Some journalists were reportedly barred from entering voting counting centres and told they must sign a declaration of secrecy form, the News on Africa website reported.

It reported the declaration would prevent them from publishing or disclosing information gathered during the vote counting process.

It reported that according to state-controlled radio, Mhlume polling station was one of the polling stations involved. EBC Chairperson Chief Gija Dlamini confirmed the restriction.

News on Africa reported, ‘He explained that this was done to protect things that can happen during the counting of votes, things that are not supposed to be publicized. When asked to make an example of those things, Chief Gija made an example of a crying candidate or a conflict between two candidates which is something that a journalist can find to be newsworthy and report about it.’

The Swaziland United Democratic Front (SUDF) reported that police closed bars, entertainment events and church services during the afternoon of election day in the Kwaluseni constituency of the Manzini region where earlier in the week police had twice violently attacked workers demonstrating for pay increases. SUDF said police were trying to force people to go and vote. 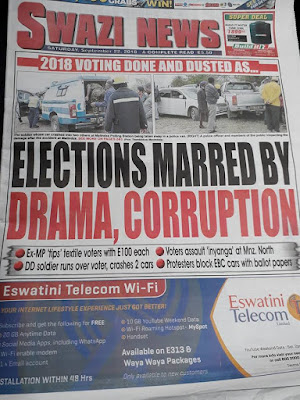 Swaziland Police Fire Gunshots, Set Off Grenades and Rubber Bullets as Voters Protest During Election
https://swazimedia.blogspot.com/2018/09/swaziland-police-fire-gunshots-set-off.html
at 7:39 AM