In the week that King Mswati III the absolute monarch of Swaziland / Eswatini received dining room and lounge furniture made of gold as birthday gifts it is reported that children collapsed with hunger in their school because the government had not paid for food for them.

The kingdom had previously been warned to expect children to starve because the Swazi Government had not paid its suppliers for the food that is distributed free of charge at schools. The shortage is reported to be widespread across the kingdom.

The Times of Swaziland, reported on Thursday (7 June 2018) that at least eight children had collapsed through hunger at of KaKholwane Primary School.

It reported the school’s headteacher Smangele Mtsefwa, saying it was because of a lack of food at the school.

The Times reported, ‘Yesterday morning, she said a Grade II pupil soiled herself after she experienced severe stomach cramps due to hunger, while others bled through their nostrils.’

The newspaper added, ‘In most cases, she said pupils complained of hunger, adding that they had gone without a meal for two days.’

The Times reported, ‘Mtsefwa said those in lower grades were more prone to falling ill, while pupils in the senior classes slept on their desks.’

‘She said the school kitchen had been locked since the beginning of the term and they were not preparing any meals for the pupils.’

On Monday King Mswati received gifts of furniture made of gold and at lest E15 million in cheques to mark his 50th birthday that fell on 19 April 2018. On that day he wore a watch worth US$1.6 million and a suit weighing 6 kg studded with diamonds. Days earlier he had taken delivery of his second private jet. This one, an Airbus A340, cost US$13.2 to purchase but with VIP upgrades was estimated to have cost US$30 million.

In February 2018, children in Swaziland were warned to prepare themselves for starvation as the government once again failed to deliver free food to schools. The Swazi Observer reported at the time that schools relying on government aid – known as the zondle programme – ‘must brace themselves for starvation as the Ministry of Education and Training has failed to deliver food to schools on time’.

It said food had been promised by the Minister of Education and Training Dr Phineas Magagula last year but it had still not arrived in many schools.

It reported school principals said some pupils were sick and on medication and depended on the food which was provided at school.

It quoted one principal who wanted to remain anonymous, ‘The pupils should brace themselves for starvation because there is no available food in the school, and they have exhausted the food that was left last year.’

Principals in schools around the Shiselweni region told the newspaper that some pupils went to school without having eaten anything and relied on the feeding  programme. ‘They cannot stand the long hours on empty stomachs,’ one said.

Acting Principal at the Ministry of Education and Training Dr Sibongile Mtshali told the Observer food would be delivered to various schools soon, but did not specify the exact date of delivery.

The schools hunger crisis has been going on for at least a year. In August 2017, members of parliament in Swaziland accused the Ministry of Education and Training of lying in a report on severe hunger in the kingdom’s schools.

They were told that the crisis was over and that school committees were stealing food intended for children.

A progress reported tabled to the Swazi House of Assembly by Minister of Education and Training Phineas Magagula was rejected. The shortage escalated after the government did not pay its bills to suppliers. The food includes rice, mealie-meal, cooking oil, beans, and peanut butter.

In a report in May 2017, the World Food Program estimated 350,000 people (a third of the population) in Swaziland were in need of food assistance. WFP helped 65,473 of them. It said it was regularly feeding 52,000 orphaned and vulnerable children (OVC) aged under eight years at neighbourhood care points. About 45 percent of all children in thought to be OVCs. 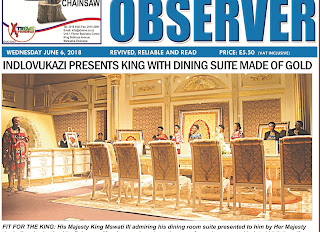 
‘CHILDREN COULD SOON DIE OF HUNGER’