A PICTURE OF POWER IN SWAZILAND


This is the picture that demonstrates the true power of King Mswati III, the absolute monarch of Swaziland. 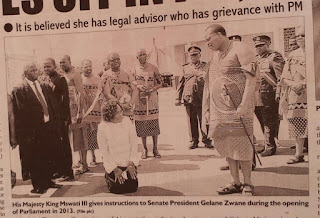 It shows the President of the Swazi Senate Gelane Zwane on her knees before the King. According to the caption of the picture which first appeared in the Times of Swaziland newspaper, King Mswati ‘gives instructions’ to her ahead of the opening of Parliament in 2013.

In Swaziland political parties are banned from taking part in elections. Elections which take place every five years (the last was in 2013) are only for 55 of the 65-member House of Assembly. The other ten members are appointed by King Mswati III. No members of the 30-strong Swaziland Senate are elected; 20 are appointed by the King and 10 are selected by the House of Assembly.

The people do not elect a government.  The Prime Minister and Cabinet ministers are appointed by the King. Only a man with the surname Dlamini can, by tradition, be appointed as Prime Minister. The king is a Dlamini.

The King appoints the President of the Senate.
at 3:22 PM