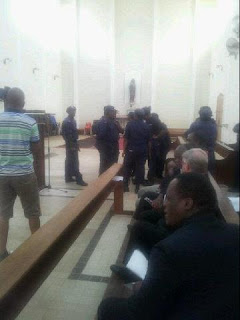 The prayer at Our Lady of Assumption was attended by Bishop Paul Verryna and Mafika Dlamini from the South African Council of Churches, as well as priests and pastors from the Swaziland Council of Swaziland Churches and the Concerned Church Leaders. It had been jointly organised by the Swaziland United Democratic Front (SUDF) and the Swaziland Democracy Campaign (SDC).

Swazi organisers had kept the venue for the prayers secret in anticipation of a raid by police.

The prayer coincided with the recent launch of SUDF’s and SDC’s campaign for a people’s government and the call of for a boycott of the undemocratic nation election in Swaziland later in the year.

In a media statement earlier this week organisers said, ‘The powerful and irresistible aspiration that our people have for “liberation” constitutes one of the principal “signs of the times” which the Church has to examine and interpret in the light of the Gospel.’

In the press release the two organisations stated that they believed the aims of the campaign for a people’s government were widely supported in Swaziland and internationally. ‘As we launch a nation-wide campaign for a people`s government  we know that we have the support of the vast majority of the oppressed and marginalized people of our beloved country Swaziland and those in solidarity with us around the globe,’ they said. 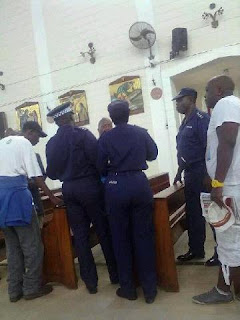 Pictures show police breaking up the prayer meeting at the Our Lady of Assumption cathedral in Manzini.
Pictures by Mary Pais.
at 2:15 PM